Desperate Tigers keen to turn things around in Cardiff 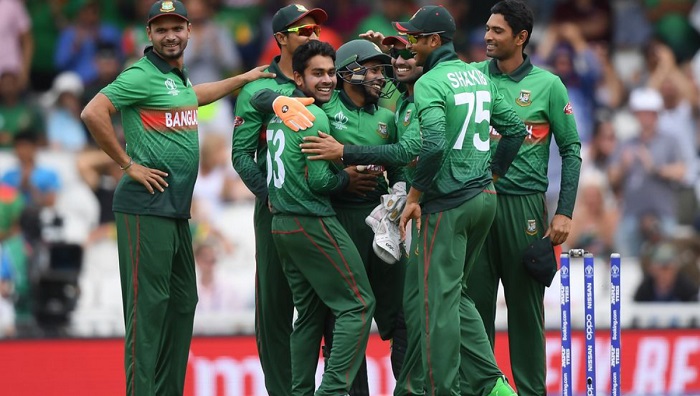 Bangladesh team, recovering from their two-wicket loss against New Zealand, reached Cardiff on Thursday where they will face hosts England in their third match.

Cardiff has been a blessed venue for the Tigers where they have played and won two matches. The first win was in 2005 when Habibul Bashar-led Bangladesh stunned Australia by five wickets. The match is still remembered as one of the greatest upsets in ODI.

Cardiff was tagged as the ‘city of blessings’ for Tigers in 2017 when they beat New Zealand in the ICC Champions Trophy chasing 265 runs. Shakib Al Hasan and Mahmudullah Riyad struck centuries in that game.

Luck has again brought the Tigers back to Sophia Garden at a time when they are desperately trying to turn things around after their defeat in a nail-biter.

Bangladesh and England are both heading to Cardiff in search of victory. Both teams played two matches each in this World Cup and won one.

Bangladesh can also find confidence from their history of beating England twice in the last two World Cups - 2011 and 2015. On both occasions, Mahmudullah played pivotal roles. The right-handed all-rounder is in the Bangladesh squad this time too.

Mashrafe Bin Mortaza, the Bangladesh captain, said that they are confident about beating England once again.

“I think they’re (England) one of the biggest sides in this tournament. It’s not going to be easy for us. But again, if we can play our best possible cricket, you never know. It's going to be difficult (for them),” he told the media at the end of the last match.

Bangladesh might face some difficulties to sort out their playing XI in this game as they suffered a lot in the previous game due to the lack of another bowler.

Rubel Hossain, who took four wickets in the last World Cup when Bangladesh knocked England out of the event, might replace Mosaddek Hossain Saikat or Mohammad Saifuddin.

But the team management is yet to announce any change.

Bangladesh will take on England on Saturday at 3:30pm (BdST). The match will be telecast by Maasranga, Gtv, Btv and Rabbithole (rabbitholebd.com), Bioscope (bioscopelive.com).