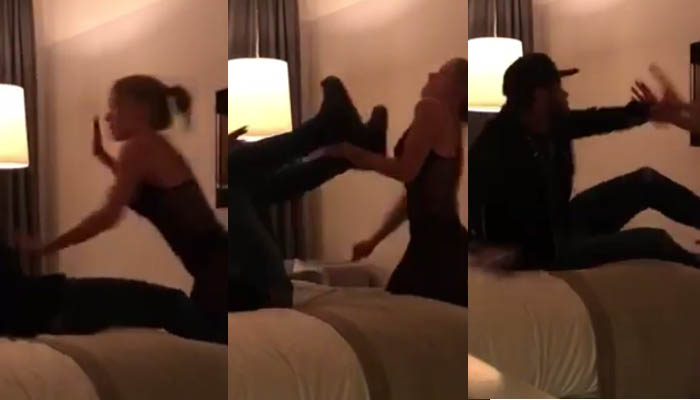 This is the explosive moment Neymar’s rape accuser lashes out at him in a hotel room as the footballer reacts by putting his feet up in an apparent attempt to ward her off.

The dramatic video emerged overnight as 26-year-old Najila Trindade went on TV to repeat claims she was raped in Paris by the Brazilian star.

The Police hit 'Every Breath You Take' can be heard playing in the background as the pair fall onto the bed together for what at first seems to be the end to a romantic evening.

The clip is reported to have been filmed the day after the alleged sex attack.

A slap and muffled voices can also be heard as the pair drift out of the range of a camera that seems to have been left in the bathroom - before Najila got up from the bed and began to slap Neymar.

The Paris Saint Germain star, who strongly denies the sex assault allegations, claims the woman is a liar and is trying to extort him.

And his dad Neymar Santos told Brazilian station Record TV after they showed footage of the confrontation between the footballer and his rape accuser: “I don’t think I have to defend my son at all. The images speak for themselves.

“The video is only going to show that Neymar was assaulted. She provokes an aggression so that he responds, but he realises that everything that was happening was a set-up.”

He added: “When my son enters the room, everything is already been filmed. It would be good for the investigation and for us that the whole video emerges. That’s what the police are trying to do, find all the images that she has.”

In the clip the footballer can be seen putting his feet up to the woman’s face and trying to grab her wrists as he moves towards her.

The one-minute six second video finishes without it being made clear what the outcome of the sudden burst of violence was.

The footage is understood to be a small segment of a longer seven-minute video that has not yet been fully published.

It was not immediately clear this morning what the rest of the video contains.

Najila’s lawyer Danilo Garcia de Andrade was quoted in Brazilian media as saying: “What she’s told me is that she needed proof of that assault, that the slap was what Neymar had done to her previously and that she got him into the room again and filmed the scene.”

The footballer’s accuser went on Brazilian TV yesterday to claim Neymar paid for her to stay at the five-star Sofitel Paris Arc Du Triumph after they chatted on Instagram.

She admitted to wanting to have sex with him when she agreed to meet him, but added when asked if she was a victim of rape: “Aggression followed by rape.”

Her former lawyers said earlier in the week they had dropped her after failing to reach an out-of-court settlement with Neymar, but insisted she had never mentioned rape to them in the beginning and had spoken only of an alleged assault which had left her with bruising on her legs and bottom.

Neymar’s dad has confirmed the authenticity of the video showing the confrontation between his son and Najila - but insisted he had been tricked by his accuser.

Insisting she had forced the scene, he said: “No one attacks from below.”

Neymar, ruled out of the Copa America which starts on June 14 through injury, is facing a separate police probe over his controversial decision to defend himself from his rape accuser by publishing photos of her and messages they had exchanged before her decision to go on TV.

Alluding to the probe the footballer’s dad  has said: “Imagine allowing an accusation like that, seeing how your son is called a rapist.

“That’s why Neymar decided to expose himself like that. We protected the woman’s face and her name, we did what we could, but it was a defence.”

On Wednesday Neymar’s mum urged her son to focus on his football in an emotional open letter backing him over rape allegations.

The deeply-religious mum-of-two, showing she felt confident Neymar would be cleared of any wrongdoing, wrote on Instagram: “Son, now everything is finally being clarified and the truth of God is coming to the fore, it’s time to learn with all this and return to his first love Jesus Christ.

“He is the only one who really knows his heart, confide in him. Focus solely on what you most love in life which is playing football.

“This is what is going to give you back the happiness that’s been missing in the last few days.

“As Christians that we are, forgive that girl. Your sister and I, as women, can assure you that she does not represent us.

“I love you lots and I will continue praying for you every day of my life. God bless you. I love you."

Trindade has revealed her identity by giving an exclusive interview on Wednesday claiming to have suffered bruising on her bottom as well as post-traumatic stress.

Speaking with presenter Roberto Cabrini, Trindade told how Neymar paid for her to stay at the five-star Sofitel Paris Arc Du Triomphe after they chatted on Instagram.

She said: "I talked to him as an ordinary person; it was a sexual intention, a desire on my part and this was very clear to him.

"He asked me when I could visit him. I said at the moment I could not go because of financial issues.

"Also because of my commitments at work. Then he suggested he could solve it."

She also revealed details of the alleged rape and physical abuse with the player.

Trindade claimed: "He turned me on my back and started the act, I asked him to stop and he kept hitting my butt."

When asked whether she was a victim of rape, she said: "Aggression followed by rape."

A medical examination carried out on May 21 - six days after the alleged rape – revealed the woman had bruising on her legs and bottom.

But reports emerged yesterday that Trindade has been dropped by her lawyer after he claims she changed her story.

Her lawyer has told O Globo TV that she initially said that she had only been physically assaulted by the footballer.

José Edgard da Cunha Bueno Filho said he only heard about the rape claim when she made it in a formal complaint to police on May 31.

Cunha Bueno Filho also said he advised her it would be better to strike a deal with Neymar’s legal team because a court case could be “long and drawn out”.

But he had concerns that the woman wanted to make public a video she made when she visited the star for a second time.

He told O Globo he was against what he described as the “bombshell measure” of releasing the video.

The PSG forward uploaded a string of WhatsApp photos and messages from his alleged victim on Sunday in an attempt to suggest her allegations were a “set-up.”

In the WhatsApp messages revealed by Neymar, the woman talks about going to the gym to make her bottom “perfect" for him.

The pictures show the woman in her underwear and wearing a bikini and as the pair appear to exchange messages.

But his bid to clear his name appears to have caused him fresh problems as Neymar could be jailed for releasing these X-rated pictures.

Cops confirmed they launched a probe into his publication of the sensitive material.

Local reports suggest Neymar could be jailed for between one to five years, if he is found guilty of infringing laws designed to protect people from being filmed or pictured without their consent in material of a sexual nature.

In an interview with Band TV, with his lawyers present, the footballer’s father Neymar senior said: “My son is a victim of attempted extortion and this is the reason why he released the messages.

“He preserved the name of the girl and her image but (my son) had to defend himself. He’s been accused of rape and this is a crime he has not committed.

“He didn’t have a choice. He preferred to commit an internet crime than be accused of rape.

“This was something he had to defend himself from quickly. It’s better that he tells the truth now to show what really happened.”

Neymar’s father spoke about the second meeting with the woman, which he claims she tried to record.

“She was desperate to meet up with her for the second time. He went (to the her hotel) and stayed for 10 minutes,” he said.

“When he was there (Neymar) noticed a mobile phone was resting on the wall and it was recording.”

According to his dad, the victim became angry with the footballer and lashed out at him.

“He managed to calm her down and left the hotel and booked her return ticket,” said Neymar senior.