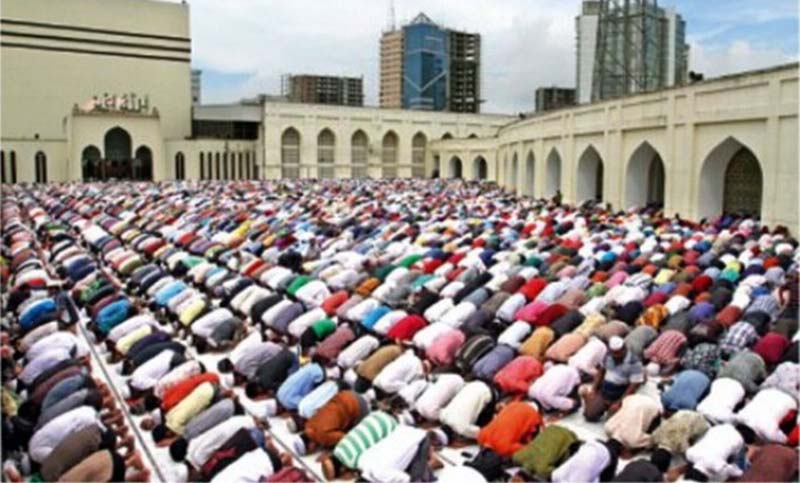 The Eid-ul-Fitr, the biggest religious festival of Muslims, was celebrated in the country on Wednesday amid religious fervour and enthusiasm after a month-long fasting.

The day of this year’s Eid was decided after much deliberation on Tuesday night. Initially, the Moon Sighting Committee said the Shawwal moon had not been sighted in the country. However, it held a second meeting after reassessing the information and decided to celebrate the Eid on Wednesday.

However, the celebration of Eid-ul-Fitr was dampened by incessant rainfall since the morning.

On this day, people usually go out in a festive mood but the downpour forced many to stay indoors. Many areas in the capital went under water.

In Dhaka alone, 36.6mm rainfall was recorded between 6am and 9am. The rain was attributed to the influence of a trough of westerly low over Bangladesh and adjoining areas.

In the capital, the main congregation was held at the National Eidgah on the High Court premises at 8:30am. President Abdul Hamid joined the Eid jamaat.

Five more congregations were held at the National Mosque.

There were arrangements at the National Eidgah and the National Mosque for women to offer Eid prayers alongside men.

This year, Gor-e-Shahid Baro Maidan in Dinajpur and Sholakia Eidgah in Kishoreganj hosted two of the largest Eid congregations in the country.

While 6 lakh devotees took part in the Eid-ul-Fitr jamaat at Gor-e-Shahid Baro Maidan, the number of devotees was 5 lakh in Sholakia, claimed organisers.

President Abdul Hamid and his spouse Rashida Khanom hosted a reception at Bangabhaban on the occasion of Eid-ul-Fitr.

The national flag was hoisted atop government and non-government office buildings. The main city streets and road islands were decorated.