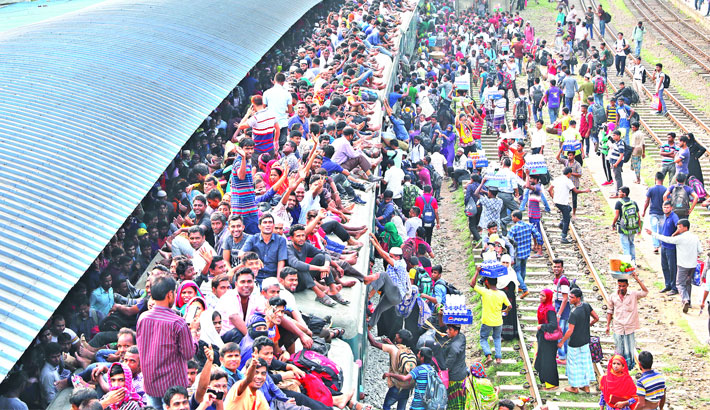 Failing to get accommodation in a jam-packed train, desperate holidaymakers are making a perilous journey, sitting on the rooftop of the railway coaches. The photo was taken from Airport Railway Station in the capital on Monday. - Kamrul Islam Ratan

The three inter-district bus terminals-Gabtali, Mohakhali, Sayedabad- plus Kamalapur railway station and Sadarghat launch terminal are struggling to cope with the huge rush of holidaymakers on Monday.

As soon as the office breaks on Monday afternoon, thousands of home-bound people started moving towards different bus terminals, launch terminal, and railway stations to catch their transport to celebrate the Eid-ul-Fitr, largest festival of the Muslims, with their near and dear ones in their ancestral village homes.

While visiting at Sayedabad bus terminal on Monday afternoon, it was found that thousands of people including women and kids heading towards Sayedabad, Gabtali, Mohakhali bus terminals.

Besides, scores of homebound travelers have also thronged Kamalapur Railway Station and Sadarghat launch terminals. But a few train services ran late even on the fourth day of Eid travels.

The gathering of home goers in the train stations have been astronomically high, but many of the trains departed delaying several hours for the fourth consecutive day which created sufferings of holidaymakers.

The rail station witnessed a huge rush of the holidaymakers on the day.

Many of the passengers were seen riding the roof tops of the train risking their lives due to heavy rainfall.

Rangpur Express was delayed by two hours, while Lalmonirhat-bound Lalmoni Eid Special train which was supposed to leave the station at 9:15am finally started for the destination around 12:00pm.

Nilphamari-bound Nilsagar Express was scheduled to leave the station at 8:00am but it left Kamalapur Railway Station at 1:00pm.

Meanwhile, Khulna-bound Sundarban Express was around two hours late while Chattogram-bound Chottola Express left the station after around 50 minutes.

Another train, Chapainawabganj-bound Rajshahi Express, scheduled for 12:20pm, left the station after 3:20pm.

Besides, Isha Khan Express delayed over three hours and 10 minutes and departed station around 2:10 pm.

Station Manager Aminul Haque said that the huge rush of holidaymakers usually took a long time to embark and disembark the trains at their respective train stations which resulted in the delays.

The delay in train schedule has led to a long wait by the passengers, many of whom, are travelling with children.

A total of 56 trains are scheduled to leave the station including three special trains.

Around 22 trains departed the station for different destinations around the country till 10am on Monday, he added.

The trains are facing delays of around four to five minutes at all stations because of the Eid rush,” said the station master.

The pressure of passengers at Kamalapur Station is also higher due to the delays.

Motiur Rahman, a factory worker and a Nilsagar Express passenger, who arrived at the station at 7am, said he has been waiting for his train for at least four hours.

“The factory closed yesterday and today a group of us is going home together. I always go back home for Eid. I endure these long waits at the station every year. But still it feels good to celebrate Eid with my family.”

Meanwhile, A mobile court has fined 24 people for travelling without tickets at the Kamalapur Railway Station on Monday.

Mohammad Nure Alam Siddique, deputy secretary of Railway, handed out the fines between10:30 am and 1pm.

The wrongdoers have been fined Tk 4,300 each, chief administrative officer of the railway said.

“Most of them had travelled without valid passes. Several of them were arrested for illegally entering the Kamalapur Railway Station,” he added.

On the other hand, launches have started leaving Sadarghat with homebound passengers for the upcoming Eid.

Sadarghat witnessed a huge rush of the holidaymakers, even many of the home goers were travelling risking their lives.

A huge rush has been seen on the Dhaka to Chandpur, Barishal, Bhola, Barguna and Patuakhali routes.

“A total of 66 launches departed from the ghat on Monday till 3:00 pm,” he said. “There is neither overloading [of the ships], nor a rush today. Everything is going quite smoothly.”, he said.

Around 100 launches will leave Sadarghat today on 43 different routes. It is estimated that 1,000,000 people will leave for their homes from Sadarghat between June 1-5, he added. The tickets are being sold at the regular rate.

Officers-in-Charge (OC) of Kotwali police station Moudud Hawlader said tight security measures have been taken up at Sadar ghat and its nearby areas to avoid any untoward incident. A total of 282 police personnel are routinely working, he added. By setting 40 cc cameras, we are closely monitoring the whole Sadar ghat area to maintain law and order, he added.