Six-Point Demand: A Watershed in Our Glorious History 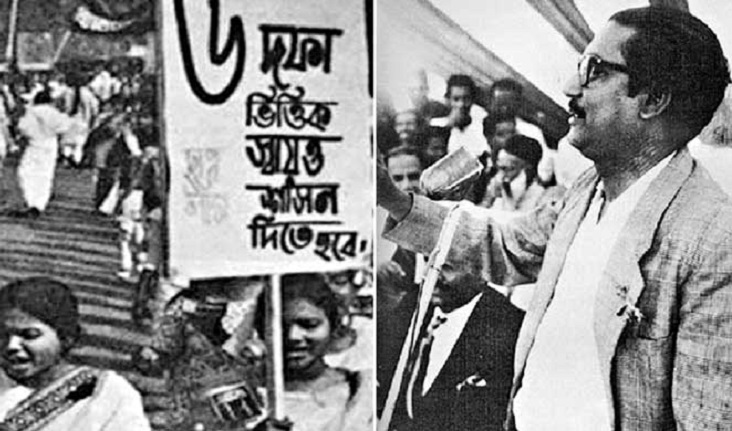 Harry S Truman pointed out aright, “Men make history and not the other way around. In periods where there is no leadership, society stands still. Progress occurs when courageous, skilful leaders seize the opportunity to change things for the better.” In fact, the Six Point Movement was an eventful nonpareil one in the then East Pakistan, conducted by Sheikh Mujibur Rahman with courageousness and skilfully seized the opportunity to change things for the betterment of people of this part of land. This crusading movement postulated for niftier autonomy for the then East Pakistan. Its main docket was to bring in the six demands booted by a coalition of Bengali nationalist political parties in 1966 to end the exploitation of East Pakistan by the West Pakistani rulers. It is considered a milepost on the route to Bangladesh's independence in 1971.

The six points are widely known and esteemed as: 1. The Constitution should provide for a Federation of Pakistan in its true sense based on the Lahore Resolution, and the parliamentary form of government with supremacy of a Legislature directly elected on the basis of universal adult franchise; 2. The federal government should deal with only two subjects: Defence and Foreign Affairs, and all other residual subjects should be vested in the federating states; 3. Two separate, but freely convertible currencies for two wings should be introduced; or if this is not feasible, there should be one currency for the whole country, but effective constitutional provisions should be introduced to stop the flight of capital from East to West Pakistan. Furthermore, a separate Banking Reserve should be established and separate fiscal and monetary policy be adopted for East Pakistan; 4. The power of taxation and revenue collection should be vested in the federating units and the federal centre would have no such power. The federation would be entitled to a share in the state taxes to meet its expenditures; 5. There should be two separate accounts for the foreign exchange earnings of the two wings; the foreign exchange requirements of the federal government should be met by the two wings equally or in a ratio to be fixed; indigenous products should move free of duty between the two wings, and the constitution should empower the units to establish trade links with foreign countries; and 6. East Pakistan should have a separate military or paramilitary force, and Navy headquarters should be in East Pakistan. But the proposal was turned down by politicians from West Pakistan and non-Awami League politicians from East Pakistan. It was rejected by the so-called Islamist political parties. The movement had gained the support of the vast majority population of East Pakistan.

Commencement of Six Point Demands, Mujib, who would not become Bangabandhu till three years later, had been placed in detention under the Defence of Pakistan Rules on 8 May 1966. The ground was not arduous to infer. Self-declared Field Marshal Mohammad Ayub Khan, President of Pakistan, made clear his opinion on the Six Points. He told the country that the purveyors of the Six Points would be dealt with in the language of weapons. Ayub Khan was not the only individual who spotted a threat to Pakistan's unity should the Six Points be acknowledged. In fact, Six-point Programme, a charter of demands articulated by the Awami League for removing disparity between the two wings of Pakistan and to put an end to the internal colonial rule of West Pakistan in East Pakistan. The Indo-Pak War of 1965 ended with the execution of Taskent Treaty.

To the old grievances of economic disparity added the complaint of negligence and indifference of central government towards the defence of East Pakistan. Bangabandhu Sheikh Mujibur Rahman was vocal on this issue. The leaders of the opposition parties of West Pakistan convened a national convention in Lahore on 6 February 1966 with a view to ascertain the post-Taskent political trend. Bangabandhu reached Lahore on 4 February along with the top leaders of Awami League, and the day following he placed the Six-point charter of demand before the subject committee as the demands of the people of East Pakistan. He created pressure to include his proposal in the agenda of the conference.

The subject committee rejected the proposal of Bangabandhu. On the day following, the newspapers of West Pakistan published reports on the Six-point Programme, and Sheikh Mujibur Rahman was projected as a separatist. Consequently, Sheikh Mujib abandoned the conference. The Six-point Programme along with a proposal of movement for the realisation of the demands was placed before the meeting of the working committee of Awami League on 21 February 1966, and it was adopted unanimously.

6 June 1966 is a red-letter day in the history of freedom movements of the people of Bangladesh. It was on this historic day that struggling people of this country took a firm and solemn vow for the achievement of their self-determination under the able and dynamic leadership of Bangabandhu Mujib. Hence, the day has great political significance. It was, once again on this day, that blood flowed out of the veins of our people as they demanded their self-rule through the famous Charter of Six-point Demands of Bangabandhu which ultimately became the Magna Carta of all movements that emanated from the soil of Bangladesh. So, the importance and significance of this historic day can hardly be over-emphasised.

If we trace the history of our freedom struggle which started long back, we will observe that Bangabandhu as a part of his long-term plan to take his people gradually and systematically to the ultimate path of emancipation by giving his historic Six-point Programme to the nation at a national conference of leaders of all political parties in Lahore on February 16, 1966. The Islamabad ruling clique for all their schemes of exploitation planned and raised a violent storm in the political arena of the-then Pakistan.

The erstwhile Pakistan Government tried their best to suppress the demand for self-determination raised by seventy-five million people of this land at that time, as was laid down in the Magna Carta of Bangabandhu. As a result of the Six-point Programme, Bangabandhu was put behind bars on May 8, l966, along with his other followers. The arrest of Bangabandhu and his followers was vehemently resented by the people, and the whole of Bangladesh protested like one entity by holding meetings, rallies and processions which rocked the distant capital in Rawalpindi. On May 20, the Awami League Working Committee decided to organise a protest meeting on June 7, 1966 by condemning repression and demanding release of Bangabandhu and other leaders, and thus came the observance of strike on 7 June. The day dawned with factories remaining closed, transport off the roads and business houses shut down.

This was the way people tried to express their indignation against the oppressors and resolute support to the leadership of Bangabandhu. People came out on the streets closing their establishments, offices and shops. They suspended all their normal activities. Dhaka became the city of processions and slogans. The workers and students brought out peaceful processions. But the regime of exploiters could not tolerate slogan-chanting people who had made a sacred vow to realise their right to self-determination and so, the ruling clique responded with the language of weapons killing scores of people including Monu Mia in Dhaka and Narayanganj. Thus the people of Bangladesh raised their slogans for independence by shedding their blood. Irving Berlin’s words are relevant here, “The song is ended, but the melody lingers on…”

Father of the Nation is an honorific bestowed on individuals who are considered the most important in the process of the establishment of a country or a nation. They are instrumental in the birth of their nations by way of liberating them from colonial or other occupation. George Washington is the father of the United States, Peter I of Russia, Sun Yat-sen of China, Sir Henry Parkes of Australia, Miguel Hidalgo of Mexico, Sam Nujoma of Namibia, William the Silent of the Netherlands, Einar Gerhardsm of Norway, Julius Nyerere of Tanzania, Jomo Kenyatta of Kenya, Carlos Mannel of Cuba, Mustafa Kemal of Turkey, Sukarno of Indonesia, Tunku Abdul Rahman of Malaysia, Mahatma Gandhi of India, Don Stephen Senanayake of Sri Lanka. So is Bangabandhu, the Father of the Bangladesh nation. Bangabandhu came, he saw, and he blessed.  “Such a big man was Bangabandhu! He is the undisputed Father of independent Bangladesh. To be unaware of this is sheer ignorance. To deny this is an offence against history.”

From 1947 to 1971, a historic period for East Pakistan was a time that witnessed many painful events taking place in this region and we must remember those upshots. This movement was a watershed in our glorious history and we should remember it with due staidness. It was for the first time when a Bengali shouted, asking for his economic and political rights and his national security. But the response from the West Pakistani rulers was rather painful and humiliating. It was an event that confirmed the myth that East Pakistan was a colony to the West Pakistan.

“There is an English saying that the king is always happy, or, 'happy as the king' - which is not true at all. But I can be as happy as a king if all of you know what is right and what is wrong and cooperate to fix things.” Bangabandhu put down the wrongs under the graveyard and fixed the things for his beloved people. From 1947 to 1971, a historic period for East Pakistan was a time that witnessed many painful events taking place in this region and we must remember those upshots.

At long last, Bangladesh was born on 16 December 1971 at the supreme sacrifices of our three millions of people at the hands of brutal Pakistani military rulers and their felonious local confederates. But the Six-Point Demand shall remain a watershed in our glorious history.

The writer is a senior citizen and writes on politics, political and human-centred figures, current and international affairs.