Donald Trump to hold talks with Theresa May amid protests 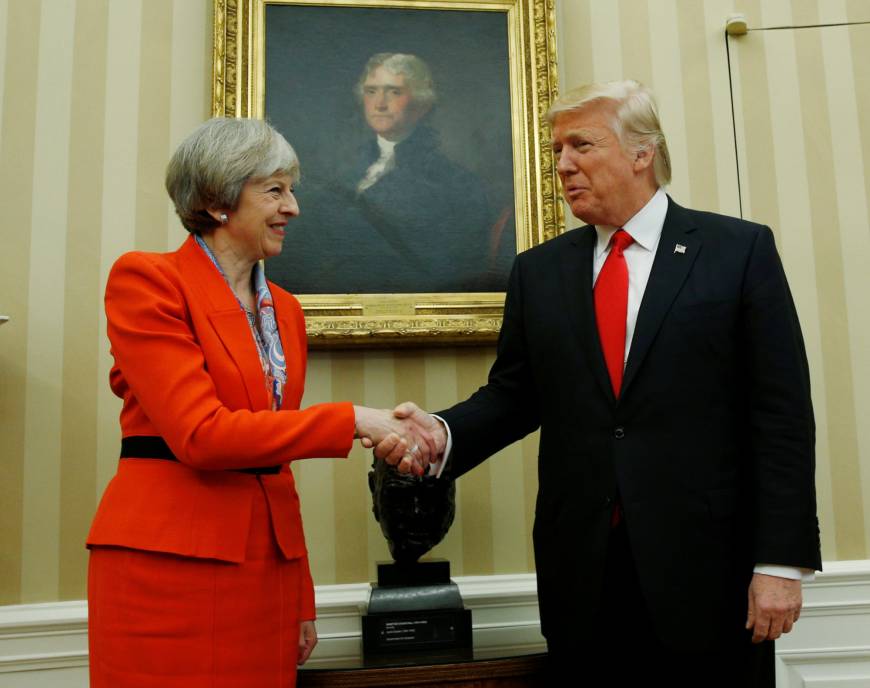 Donald Trump is to meet British Prime Minister Theresa May for "substantial" talks on the second day of the US president's three-day state visit to the UK.

Foreign Secretary Jeremy Hunt will be among the senior ministers present at the talks, where issues such as climate change will be discussed.

It comes as large-scale protests are planned in several UK cities, including a demonstration in Trafalgar Square.

Labour leader Jeremy Corbyn is due to address protesters at the London rally.

Mr Trump praised the "eternal friendship" between the UK and US during a state banquet at Buckingham Palace at the end of the first day of his trip.

The Queen said the countries were celebrating an alliance which had ensured the "safety and prosperity of both our peoples for decades".

Earlier on Monday, the US president reignited his political feud with the mayor of London, calling Sadiq Khan a "stone cold loser" just before landing on UK soil.

Mr Trump and Mrs May will start Tuesday by co-hosting a breakfast meeting of British and American business leaders at St James's Palace in a bid to boost trade links.

The Duke of York, Chancellor Phillip Hammond, US Secretary of State Mike Pompeo and the president's daughter Ivanka Trump are also expected to attend.

Mrs May, who will stand down as Tory leader on Friday, will then hold talks with the US president in Downing Street, when they are expected to discuss a range of issues on which they hold differing views.

The prime minister will raise the issue of climate change, with a government spokesman again saying on Monday the UK was "disappointed by the US decision to withdraw from the Paris Agreement in 2017".

The two leaders are also expected to discuss Huawei. The US has blacklisted the Chinese firm for security reasons, while the UK may allow it to supply "non-core" components for its 5G network.

Downing Street said there was nothing unusual in the pair not having a formal one-to-one meeting.

The PM's official spokesman said it was "always going to be the case" that the meeting in the Cabinet Room at No 10 would involve the delegations from the two sides rather than just the leaders and there would be "substantial bilateral discussions".