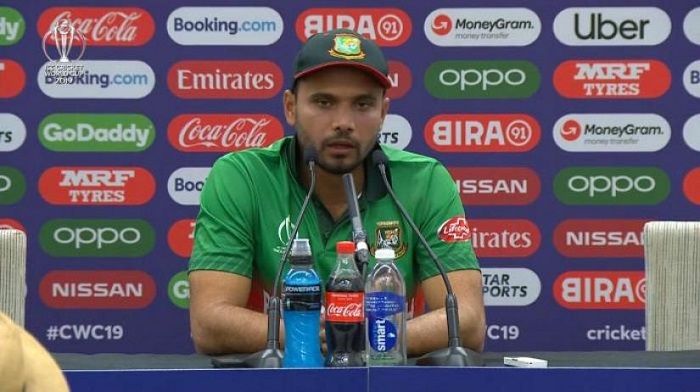 Bangladesh skipper Mashrafe Bin Mortaza urged his teammates to keep their excitement under control after the landmark victory against South Africa in their World Cup opener on Sunday at The Oval as he believes they have still a long way to go in the World Cup.

Bangladesh compiled their ODI highest 330-6 and defended it on the back of some superb bowling to beat South Africa by 21 runs and this was the first time that they kicked-off World Cup with a victory.

Mashrafe, who also became the most successful skipper for his country with four win out of six matches in the World Cup, seemed to know it can also get into head of his team mates.

”One other thing is that, it’s very important for our players to stay calm. We have just won one match, there are eight more matches to go,” Mashrafe said after the match.

”This win doesn’t take us anywhere in this tournament now. So, I don’t think we have to be very excited right now. Still a long way to go,” he added.

”I will say that we don’t have looked that far yet. It’s just one match, we were focused today, this match is over and we should stop thinking about it,” he said.

Mashrafe rather insisted to devise plan on how they can win against New Zealand, who looked a team tougher to beat this time around.

”We have to plan about our next match against New Zealand. And we have to make sure that we execute those plans against New Zealand. We should give more importance on this I think. If we had lost today’s match then I think this match wouldn’t have helped us either. We won today, may be it will improve our confidence.

Mashrafe however said that he is a firm believer of luck and it played a big role behind their success against South Africa. And he said that he is praying that luck will be with their side throughout the tournament.

”If any other captain was in my place, maybe he could have said differently. But I believe in luck. Of course we do planning, every team does that. But planning doesn’t always work, luck is also necessary. If we want to do the best result in this type of tournament you will need the favor of luck all time,” said Mashrafe

”If you see today’s match, among all the turning ball in the match, the ball turned most got the wicket of Faf du Plessis, who looked to take the match away from us.