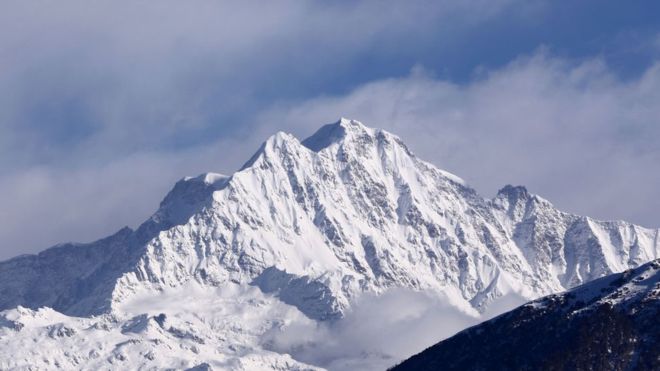 A helicopter searching for eight climbers who went missing in the Indian Himalayas has spotted five bodies, a military source says.

Four Britons, two Americans, an Australian and an Indian made up the missing group who disappeared on India's second highest-peak.

"They were on the same route as the climbers had taken," a source told AFP, referring to the bodies seen.

The Nanda Devi mountain was believed to have been hit by multiple avalanches.

Authorities are trying to assess how to retrieve the bodies from such treacherous terrain where helicopters cannot land, says the BBC's Yogita Limaya in Mumbai.

The climbers have not been heard from since 26 May, a day before an avalanche hit the 7,816-metre mountain.

Four other climbers who were part of the group ascending the peak were rescued on Sunday and have since then been assisting rescue efforts.

They had turned back early because of the harsh weather, and were the last ones in contact with the larger group.