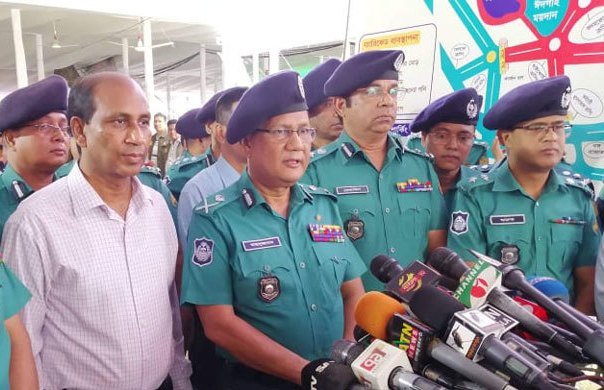 Those joining the Eid congregation at Jatiya Eidgah will not be allowed to carry anything other than umbrellas and prayer mats, said Dhaka Metropolitan Police (DMP) Commissioner Md Asaduzzaman Miah.

The DMP boss made the remark at a press conference after visiting the security measures at Jatiya Eidgah in the capital on Monday.

The DMP chief requested the city dwellers not to carry any prohibited things such as vanity bag, backpack, sharp weapons and metals including knife and scissors, mobile phone, explosive substances and arms to the Eidgah to help maintain public security.

Talking about security measures taken at the Jatiya Eidgah, he said, “Each of the spots of the Jatiya Eidgah has been brought under the coverage of close circuit camera televisions (CCTVs). Both uniformed and plain-clothe police personnel will be deployed in and around the Eidgah in large numbers to make the security foolproof.”

“SWAT, bomb disposal unit and dog squad of the DMP will be kept ready to avert any untoward incidents,” he said, adding that same kind of security arrangements have also been taken for the Baitul Mukarram Mosque.