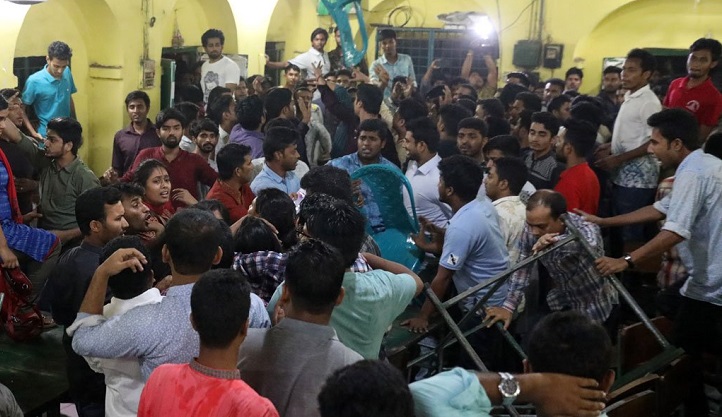 The recent debates over the issue of the declaration of the central committee of BCL have made many of us think about the potentials of student politics in the country. When the president and secretary of BCL were chosen by the Prime Minister, it was expected that a qualitative change would come through them. The Prime Minister took quite some time to pick them based on information collected by different intelligence agencies. It was also widely advocated at the AL central leadership that they were keen to neutralise the domination of syndicate in the BCL. Thus, many of us started expecting to observe a change in the philosophy of student politics in the country. The newly elected president and secretary of BCL also took a substantial time to declare the full committee. But once the committee got into the air, all hopes were nipped in the bird.

Through the announcement of the committee, the brutal reality came into the public as the committee was fervently criticized by a major group of BCL leaders. There are allegations that at least 99 controversial leaders have managed to position them in different posts in the central committee. There has been skirmish among the aspirants and the committee members. The situation reached such a level that the Prime Minister had to instruct the central leaders to conduct an inquiry into the allegations of different segments and take actions. Later on, holding a press conference the central BCL leaders acknowledged that there are serious controversies against 17 leaders who have been named for different positions. They assured that they would conduct an inquiry to take regressive actions if the allegations are found true. But the aggrieved groups rejected the number by claiming that there are at least 99 central committee members against whom there are serious allegations.

The most perturbing fact is that many infiltrators have managed to register their names in different important posts of the central committee of BCL. Along with the infiltrators, there are many against whom there are allegations of different types of corruption. This indicates that there is hardly any place for the dedication and ideology in the BCL.

One of the most important dimensions of the newly formed BCL committee is that the committee has remained predisposed towards Dhaka University students. The central leadership should comprehend that the central committee will have to work throughout the country. Thus, they should make a committee ensuring the participation of student leaders across the country. But unfortunately, the majority of the central leaders have been picked from Dhaka University. For instance, we all know that Rajshahi University is the second largest university in Bangladesh. The student leaders of these universities have played an important role during all national crises. But only two leaders have managed to position them in the 309-member central committee. This is really an ignominy for the leaders of the BCL Rajshahi University unit. If a committee is formed without ensuring the regional balance, this committee will fail to work for the betterment of the students across the country.

Very often, we are notified through different online, electronic and print media that BCL leaders are getting involved in different types of criminal activities. In some cases, they are getting patronisation from the law enforcement agencies as well as local political leaders instead of getting due punishment for their felonies. It does not mean that none of them is getting punished for their delinquencies. At the same time, it is also true that whoever is getting punished for their crimes it is due to media who are playing an important role in highlighting these issues. It is important to mention here that the AL leaders are also playing a dirty role in student politics. There are many leaders who are trying to place their followers in the central committee with the expectation that they would be able to exercise their control in student politics through them. This is also a very depraved practice that is causing impairment to the overall political environment of the country. In addition to these, the recent attacks on DU VP Nur at different places by the BCL activists have been vehemently criticised by all corners of the society. If these reprobates are not controlled by their political masters and law enforcing agencies they would emerge as a serious problem for the ruling party.

Another issue of concern is that different types of allegations have been coming into the air on the character of the BCL central leaders. It has been learnt from different online media that some of the central BCL leaders have manipulated female activities or leaders on a regular basis. These allegations deserve the attention of the central leaders of the AL. We all should bear in mind that students are the future leaders of our country. If these leaders fail to control their character and emotions at an early age how would they lead the country in the future - this is a million dollar question? I am really astounded reading through some of these allegations against BCL central leaders. The organisation that started its journey through the leadership of our Father of the Nation should not be steered by those leaders who are accused of harassing female students.

In Bangladesh, there is a propensity that every matter needs to be sorted out by the Prime Minister - be it an administrative issue or a political. This sort of dependency is not good for the state and the party that governs the state. But we cannot discard such realities. Thus, the ball is now in the court of the Prime Minister who is the President of AL and chief patron of BCL. We have already seen that our Prime Minister has instructed the BCL central leaders to take appropriate measures to conduct an inquiry against all allegations. But this instruction would not work. She will have to take the necessary actions against all those who have remained involved in any kind of conspiracy. She should also consider taking actions against those who have manipulated their position for personal gains. It is now high time to take appropriate measures for redefining the ideology of the politics of BCL. And this initiative needs to be initiated by our PM. If she could do this, she will be remembered by the countrymen for touching another milestone.