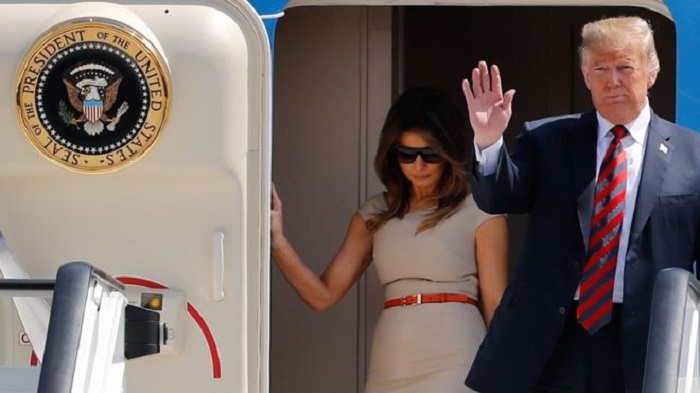 US President Donald Trump will arrive in the UK on Monday morning for a three-day official state visit.

Air Force One is expected to land at London Stansted Airport at 09:00 BST.

The Queen will host a state banquet at Buckingham Palace on Monday evening for the president and the First Lady Melania Trump.

Protests are planned across the UK during the visit - including rallies in London, Manchester, Belfast, Birmingham and Nottingham.

Ahead of his visit, President Trump told The Sun he was backing Tory leadership contender Boris Johnson to be the next UK prime minister.

He also told The Times that Brexit Party leader Nigel Farage should be involved in the government's negotiations to leave the EU.

On Monday, the president will be given a tour of Westminster Abbey and will also meet Prince Charles and the Duchess of Cornwall for tea at Clarence House.

At the state banquet, President Trump and the Queen will be joined by the Duke and Duchess of Cambridge.

The Duchess of Sussex will not attend following the birth of her son Archie, who is less than a month old.

Both the president and the Queen are expected to make a speech to guests, which will include prominent Americans living in Britain.

President Trump will be staying at the US Ambassador's residence Winfield House, near Regent's Park in central London.

On Tuesday morning, President Trump and Prime Minister Theresa May will host a business breakfast at St James's Palace.

President Trump will then visit Downing Street for further talks with Theresa May, followed by a joint press conference.

Theresa May will raise the issue of climate change with him during the visit, Downing Street has said.

Protesters are organising a "national demonstration" which will start at Trafalgar Square at 11:00 on Tuesday.

Both the Stop Trump Coalition and Stand Up to Trump protest groups said they would be present.

The Met Police said it had "a very experienced command team" leading the operation to deal with the visit.

The police operation for the president's visit last year was estimated to have cost nearly £18m.

On Wednesday, President Trump will visit Portsmouth to mark the 75th anniversary of the D-Day landings.

He will then fly to Shannon, in Ireland, to meet Irish Taoiseach (Prime Minister) Leo Varadkar, before going to his golf course at Doonbeg.