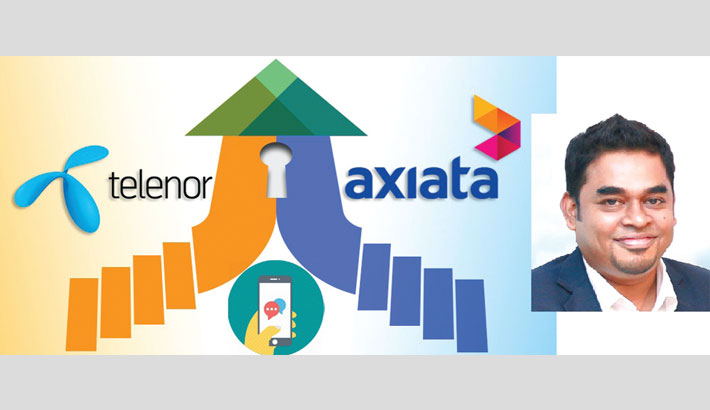 A new discussion has begun on the future of the ownership of the operators of Bangladesh recently, after the news of the possible integration of Telenor and Axiata in several Asian countries. This integration has led to major changes in the telecom sector of Bangladesh.

However, the Axiata has been mentioned that Robi, a proprietor organization of Axiata in Bangladesh, will not be included in this process. In other words, the ownership of Robi will remain unchanged. In addition to, it is to be noted that currently Axiata have 68.7 percent  ownership in Robi and India’s Airtel have 25 percent and NTT Docomo have 6.3 percent ownership in Robi.

Meanwhile, if Telenor-Axiata is unified, around 25 percent of Grameenphone(GP) , the country's largest operator, ownership will go to Axiata. That is, Axiata will be the owner of Robi and Grameenphone, the two top operators of the country. As a result of the ownership of two different operators, the future of Axiata in Bangladesh will change naturally.

Certainly, the new ownership of Grameenphone will be beneficiary for Axiata. Currently, GP is the only profitable operator of the country and is increasingly raise the profitability of the operator. The government has already started the process of implementing the SMP policy to reduce the operator's supremacy in telecom sector. However, GP is in a strong position despite the implementation of the SMP policy and there is less possibility of being significantly hampered in profit margin.

It is very difficult at this moment to get a clear idea of what the role of the organization can be in the case of ownership of Robi if Axiata is being continuously benefited from GP. Because, despite huge investment in the expansion and marketing of the 4G network, Robi has not yet become a truly profitable operator. Reviewing the market for the first four months of 2018 and 2019, it is seen that Robi's earnings from the data did not increase as compared to the investment.

Moreover, it is not logical to expect that the country's telecom sector is intensely competitive, and Robi will become a profitable operator in few days. In such a scenario, when Axiata start getting profit from GP regularly, a question will raise that how much profitable it will be to continue investing in Robi for the company.

In this case, it is important to consider another matter. At present, Robi Tower is owned by edotco Bangladesh, which is a subsidiary of Axiata's edotco. When Telenor is integrated with Axiata, a portion of the ownership of this company will go to Telenor. In that case, as edotco acquired all the BTS from Robi in Bangladesh, and they also can acquire Grameenphone owned towers as well.

If edotco take over all the towers of these two company, more than 70 percent of the total BTS belongs to the four operators of the country will cover by edotco. In that case, the ownership of the two significant market based enterprises in Bangladesh will be unified to edotco.

When this situation arises, the scope of the business of three other tower licenses holders will be very limited. After the acquisition of the BTS of Robi, edotco Bangladesh started BTS transfer process to Robi. Apart from this, no other operator yet to start the BTS transfer process. In such situation, due to the monopoly of the edotco Bangladesh, the three other organizations will be damaged.

However, there will be a possibility for Axiata of increasing income through edotco. Overall, there have enough opportunity of gain trough Grameenphone and edotco. In this situation, a question may arise about how much profitable it will be to invest in Robi, a non-profit operator.

In view of the investment point, another major challenge is awaits for Robi.

Robi's 4G network is 10-MHz wave based, and lifespan of the frequency allocation of 1800 MHz band will expired in next year. Side by side, the lifespan of 2.4 MHz wave, which is suitable for 2G and 3G service at a relatively low cost outside the big city, of 900 MHz band will end next year. If this wave expires, then Axiata will have to spend huge amounts of money to get a new wave to provide services for Robi.

In the context of the new ownership of Axiata-Grameenphone, this huge expenditure of the company is not profitable from business point of view for Robi. If there are two areas of investment in the market, the investor will normally be interested in investing in the case of which the potential for profit is higher. Being an operator, Robi is still not profitable, so it may be due to future investment related problems.

Now, overall telecom sector in Bangladesh is passing through changes. Changes in ownership of operators will undoubtedly have long-term impact on this sector.

Mojahidul Islam Dheow is President at Bangladesh ICT Journalist Forum (BIJF). He can be reached over email at [email protected]