Tigers post their highest ODI total of 330 against South Africa 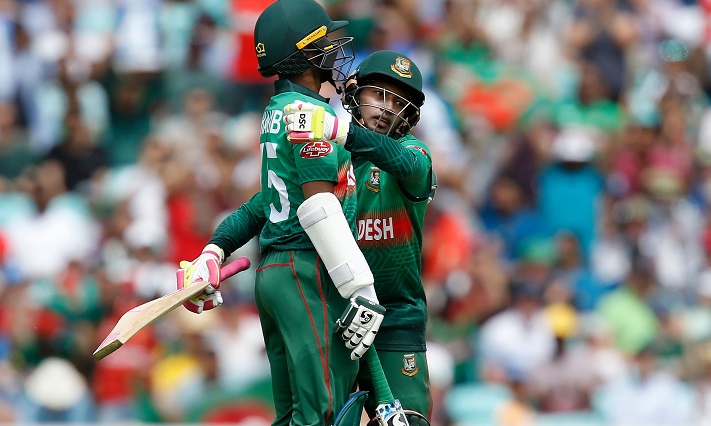 Bangladesh amassed their highest total in their ODI history scoring 330 for six against South Africa in the ICC World Cup match at Oval in England on Sunday.

Both Mushfiqur Rahim and Shakib Al Hasan scored fifty with an outstanding partnership of 142.

That was Bangladesh's highest World Cup stand and set the stage to beat their previous highest ODI total of 329 for six against Pakistan in 2015.

The openers Soumya Sarkar and Tamim Iqbal went back to the pavilion after striking 42 off 30 and 16 off 29 respectively with a partnership of 60 runs in 8.2 overs.

Mahmudullah and young star Mithun scored 46 off 33 and 21 off 21 respectively. Mosaddek Hossain scored 26 off 20 balls while Mehedi Hasan was not out at 5.

Mosaddek Hossain got a place in the playing XI. To pave a way for him, Sabbir Rahman was overlooked, who recently was not on a good touch.

Before coming to this match, South Africa lost the World Cup opener against the hosts England by a big margin of 104 runs. They tumbled for 207 all-out while chasing the target of 312. They suffered more against the pace attack of the hosts as the newbie Jofra Archer took three wickets in his World Cup debut. Besides him, Liam Plunkett and Ben Stokes bagged two wickets each as well.

Bangladesh played three matches against South Africa in the World Cup and won one of them in 2007. In the other matches, they lost by 10 wickets (in 2003) and 206 runs (in 2011). Tigers' only World Cup win over South Africa was a surprising one because of the difference in strength and ability. This time though, Bangladesh are strong enough to fight hard against the Proteas.