Trump: UK should be prepared to leave EU without a deal 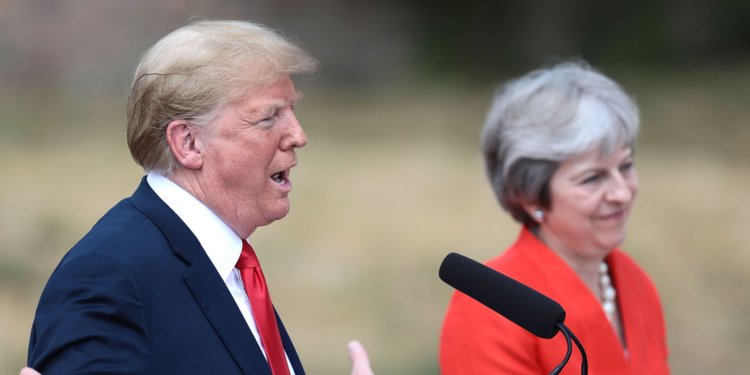 The UK should walk away from the EU without a deal if it cannot secure the terms it wants, Donald Trump has said.

The US president was speaking to the Sunday Times ahead of his arrival in the UK on Monday for a state visit.

Trump also said the UK would do well to include Brexit Party leader Nigel Farage in talks with the EU, describing him as "a very smart person".

Mr Trump's comments came after he said Boris Johnson would be an "excellent" Conservative Party leader.

Candidates in the Tory leadership contest to replace Prime Minister Theresa May have begun setting out their Brexit strategies.

Among them, Sajid Javid, Esther McVey and Dominic Raab have said the UK should leave the EU on the current planned departure date of 31 October with or without an agreement.

Rory Stewart does not back a no-deal Brexit and Matt Hancock says politicians must be honest about the trade-offs involved in getting a deal approved by MPs.

Jeremy Hunt has warned against taking a hard line with Brussels, saying it would provoke a similar response.

He suggested the UK should not pay the £39bn ($49bn) Brexit "divorce" bill laid out in the current withdrawal agreement.

To compensate for lost trade with the EU, Mr Trump vowed to "go all out" to secure a free trade deal between the UK and US within months of Britain leaving the bloc.

The first day of Mr Trump's state visit to the UK is set to include a private lunch with the Queen, tea with the Prince of Wales and the Duchess of Cornwall, and a state banquet at Buckingham Palace.