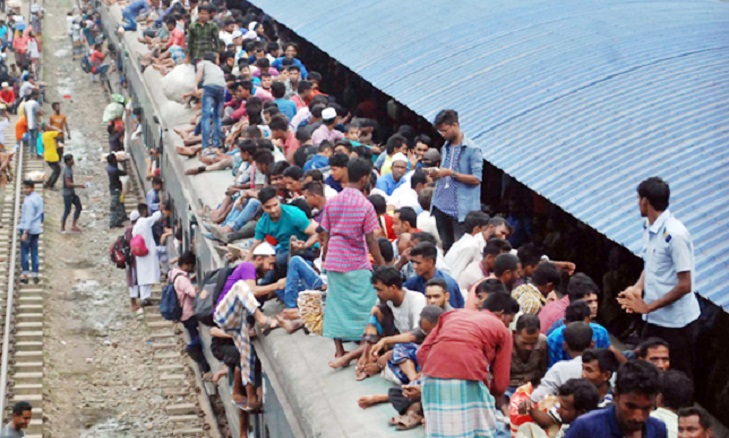 The capital Dhaka is taking a desert look as thousands of holidaymakers are leaving the capital for their ancestral village homes to celebrate the festival with their near and dear ones.

City dwellers, especially the family members of both government and private job holders, started leaving the capital since Thursday morning.

Though the official holiday will begin on Tuesday next, many employees and officials of government, semi-government and private offices have chosen to send their families a bit early taking leave for Monday to avoid the mad rush of people just ahead of Eid.

Eid-ul-Fitr, one of the biggest religious festivals of the Muslims, will be celebrated in the country either on June 5 or 6 subject to the sighting of the Shawwal moon.

According to the Dhaka Metropolitan Police (DMP), around 5 to 6 million people are expected to leave the city to enjoy Eid at their village homes. They will travel by train, bus and launch until Sunday to reach their destinations.

Masudur Rahman, deputy commissioner of the DMP, said the DMP has taken tight security measures so that no untoward incidents take place at the city launch/bus terminals such as Sadarghat, Gabtali, Sayedabad and Mohakhali and Kamalapur railway station.

Huge contingent of RAB had also been deployed in and around the terminals to avoid any untoward incidents.

Highway police sources said the Eid holidaymakers will suffer less on the national highways this time if the weather remains favourable as they will get three holidays before Eid. Similarly, they expect hassle-free journeys on rail and river routes.

Passengers who travelled on the Dhaka-Chattogram Highway are happier than others as the recent inauguration of two bridges over the rivers Meghna and Gomti has eased traffic jams at major points.

Meanwhile, Road Transport and Bridges Minister Obaidul Quader said the journey of Eid holidaymakers will be comfortable as he negated any possibility of traffic jam on highways.

“There is nothing to be worried of traffic congestion on roads and highways this year. The holidaymakers will also be able to return to the capital city smoothly after celebrating the Eid,” he said.

Transporters and passengers also credited the upgrade of the Dhaka-Chattogram Highway to a four-lane one, establishment of overpasses in places of level-crossings in Cumilla and Feni, and launch of online toll payment system with the ease of traffic congestions.

It took two and a half hours to reach Feni from Dhaka’s Sayedabad on Saturday, a journey which had taken four to five hours, and even up to 12 hours sometimes, before Eid in previous years, a passenger said.

The second bridge on the river Shitalakkhya at Kanchpur has also brought relief for Sylhet-bound travellers.

They can now cross the river through Kanchpur in minutes. Doing so would take hours during the Eid travel rush in previous years.

Several thoroughfares on the Joydebpur-Chandra-Tangail-Elenga portion of the Dhaka-Tangail Highway linking 23 districts, including 19 in the north, with the capital have recently been set up.

The flyovers, underpasses, and overpasses in Gazipur have made the journey easier despite works to develop the key highway into a four-lane one, according to officials.

At least 700 law enforcers have been deployed to stop traffic congestions on the highway, Tangail Superintendent of Police Sanjit Kumar Roy said.

Passengers were also happy about buses running on time and hassle-free purchase of ticket at the counters in Gabtoli, Kalyanpur, and Shyamoli.

Tickets were also available for those who did not confirm them in advance.

But, some passengers complained that the operators were charging them at least Tk 100 more than they do usually for trips to the north.

Homebound people leaving Dhaka to celebrate Eid with their dear and near ones via trains faced sufferings on the second day of the journey as several trains lagged behind the schedule.

Though the rush of the holidaymakers was less compared to that of Friday, the schedule of at least four among 32 trains could not be maintained.

Meanwhile, Chapainawbgaj-bound Rajshahi Express, scheduled to leave the station at 12:20pm, was rescheduled at 2:45pm. However, the train could not reach the platform till last reported at 3:30pm.

The Rajshahi Silk City, scheduled to leave the station at 2:40pm, was rescheduled at 5:10pm. However, the train could not reach the platform till filing the report at 5:30pm.

Nilsagar Express departed the station three and half hours later at 11:30 while Railway authority arranged compartments for Rangpur Express as the train did not reach the station in due time.

Many passengers of Rangpur Express did not get their seats as per their tickets. Those who purchased tickets for air-conditioned or cabin ended up in general compartments which caused dismay among the homegoers.

Clarifying the reason behind the delay of Rangpur Express, Aminul said the train initially got delayed due to a storm and later on there was a technical glitch in one of its compartments on Thursday.

The Rangpur Express, which was delayed by more than seven hours yesterday, was replaced by another train under special arrangement.

Sundarban Express left the station one hour behind the schedule at 8:20 while Chattogram-bound Mohanagar Prabhati express departed the station half an hour behind its schedule.