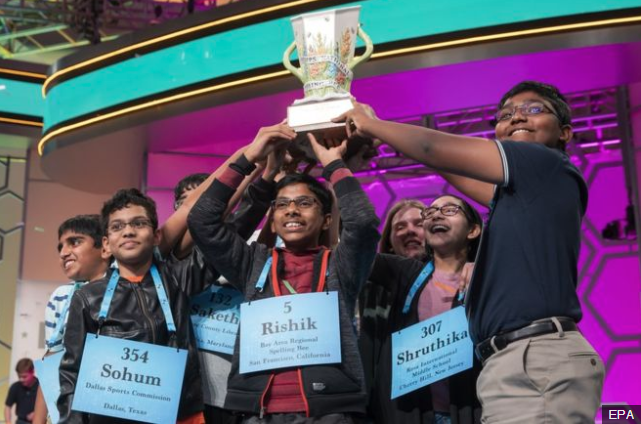 A record number of eight children have been crowned co-champions in the US of the Scripps National Spelling Bee.

On Thursday night the finalists, aged 12 to 14, spelled their way through 20 tough rounds of the competition.

Organisers eventually announced that it was a tie, as they had run out of words that were challenging enough.

With six of the winners being Indian-American, it is the 12th year in a row that the bee has been won by children of Indian descent.

This year's contest was held in Oxon Hill in Maryland. It began on 26 May and lasted for three days.

Some 562 super-spellers under the age of 15, from across the US, US territories and six other countries, took part.

Saketh, 13, told Associated Press: "I don't know if I would've won if they kept going. I was super tired because it was like [midnight], and I was exhausted."

Among the words they spelled correctly were omphalopsychite, a person who stares at their navel to induce a mystical trance, and auftaktigkeit, a musical principle where all musical phrases begin on an upbeat.

There were quite a few tough medical terms in there too - including erysipelas, an infection that causes red rashes on the skin, and geeldikkop, a type of plant poisoning that can affect sheep.