What to do if you get stung by jellyfish? 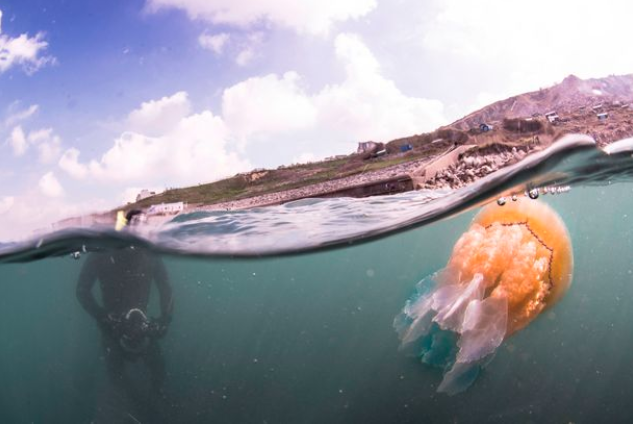 They are an increasingly common sight on trips to the seaside - and while fascinating for some, they can be terrifying for others.

Climate change is being blamed for the increase in the numbers of jellyfish in British seas, but others believe overfishing of their predators is another reason.

Last month beachgoers were shocked to find a jellyfish the size of a dustbin lid washed up on a Perranporth Beach in Cornwall.

The barrel jellyfish is the largest found in UK seas.

Sea kayaker Rupert Kirkwood, who studies Cornwall’s coastline, said: “There are more barrels jellyfish around the coast of southwest England than I have ever seen in 15-plus years of sea kayaking.

“A lot more. I have seen more in the last three days than all the others years added together.”

And last summer holidaymakers came across different types of jellyfish all around the UK.

They included large numbers of the lion’s manes jellyfish, which can grow longer than a blue whale and have the most severe sting of any jellyfish species in Europe, often leaving their victims hospitalised.

Swimmers were stung in Hythe, Kent, and in Galway, Ireland, lifeguards ordered people not to go into the water after one woman was stung on the face.

So how dangerous really are jellyfish? And what should we do if we come across one, or are stung by one, on the beach or while swimming in the sea?

What should I do if I see a jellyfish?

Jellyfish are most commonly found in warm, shallow wasters close to beaches, which is why they get washed up onto beaches.

They are most likely to be seen from mid-spring through to late summer and early autumn, depending on species and also the weather and oceanographic conditions.

Most species found in the UK only deliver a mild sting.

However, if you see them collected together in large clusters known as blooms, it is advised to exit the water as soon as possible.

Beached or dead jellyfish and even separated jellyfish tentacles washed up on the beach can still sting, so keep your children - and your dog - away.

If you happen to come across a Portuguese man-of-war, with a characteristic purple-blue oval-shaped float, you should report it to the local authorities.

What happens if I am stung?

That depends on what kind of jellyfish it is.

The worst offender is the Portuguese man-of-war, which is actually not a true jellyfish but a jellyfish-like animal, classed as a siphonophore.

It has a powerful sting and been responsible for deaths overseas, but it is rare in the UK.

More common in British waters are the mauve stinger and lion’s mane, both of which can give “electric shock”-like stings.

Jasmine Headlam, from the Ryan Institute at the National University of Ireland in Galway, said: “Lion’s mane stings can cause a lot of pain.

“Stings from large lion’s mane can be particularly dangerous, as the thousands of thin tentacles can each extend to several metres long.

“Initially a string may result in itching or localised pain that may radiate to other areas of the body, potentially progressing to severe pain within 20 minutes or more.

“In some cases, stings can involve symptoms including back pain, nausea, abdominal cramps, sweating and hypertension.”

Other jellyfish stings are less painful, often compared to that of a nettle.

How should I treat a jellyfish sting?

Jellyfish have stinging cells, called nematocysts, in their dangling tentacles which fire like mini harpoons, so if you’ve been stung the first thing to do is check that you don’t still have some tentacles attached to your skin.

If you do, scrape them off whilst trying not to touch them – try using a shell or credit card.

Research has also shown that adding vinegar can help. The vinegar stops any stinging cells that haven’t yet delivered their venom from firing their venom load.

But don’t wash the area with fresh water, as that encourages more cells to fire, while applying an icepack doesn’t help stop the pain.

However, research has shown that heat can break down the venom, stopping it from causing you pain. So if you have a heat pack, or even a hot drink, use it to warm the affected area.

If symptoms become more sever, or a sensitive part of the body has been stung, seek medical help.