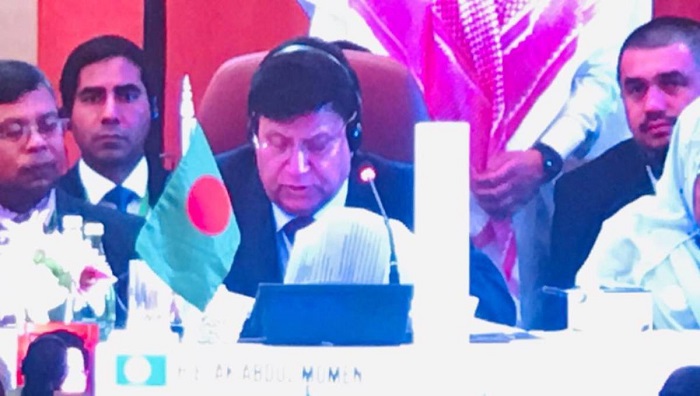 Foreign Minister Dr AK Abdul Momen on Thursday emphasized that the Muslim nations should be able to resolve their own issues within OIC and proposed a new platform for the Ulema to work together to counter extremism and terrorism.

While speaking on cooperation for faster development, the Foreign Minister stressed the need for synchronizing policies and programmes of the IsDB with the goals and targets of the OIC under its second ten year development plan.

Dr Momen prominently highlighted the issue of the forcibly displaced Rohingya community of Myanmar sheltered in Bangladesh and sought support of the OIC member states in resolving the crisis.

He particularly stressed on addressing the two important issues- their repatriation to Myanmar and the issue of accountability and justice for gross human rights violations and crimes against humanity done against the Rohingyas.

The Minister appreciated the Gambia led initiative of taking legal recourse to establish Rohingya rights and address their justice question at the International Court of Justice against Myanmar.

He was addressing at the OIC Council of Foreign Ministers (CFM) preparatory meeting to 14th Islamic Summit of the OIC.

The meeting agreed on the outcome documents – a resolution on Palestine and the draft final communique, which among other issues, covered the Rohingya crisis and contain directions for member states to address the return and accountability questions, according to the Ministry of Foreign Affairs.

The drafts were finalized by the senior officials meeting on May 27 in which the Bangladesh delegation was led by Director General Amb. A F M Gousal Azam Sarker.

During his intervention at the Ministerial Level meeting the Foreign Minister highlighted the need for solidarity and unity among the member states of OIC.

He stressed on cooperation in diversified fields while underscoring the urgency for addressing the major challenges of the Muslim Ummah such as the conflict situation and tension in many OIC countries, terrorism, Islamophobia, humanitarian issues, and underdevelopment.

On the sidelines, the Foreign Minister attended the Ad Hoc Ministerial Committee Meeting dealing with the Banjul process of accountability and justice for Rohingyas.

The meeting came out very productive and fruitful, said the Ministry of Foreign Affairs here.

On the sidelines of the CFM, the Foreign Minister met his counterparts from Indonesia, Malaysia, Brunei and Maldives.

The leaders discussed various issues of mutual concern as well as issues of importance for the Muslim Ummah in general.

The issue of Rohingya featured prominently during the discussion and the leaders put emphasis on the repatriation and accountability of the perpetrators.

He also discussed with South East Asian Cooperation Forum for economic integration in the region which is expected to be launched in Dhaka in June 2019.