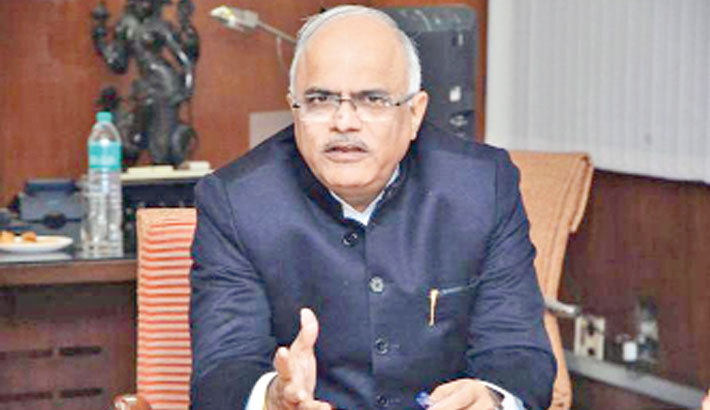 In an interview with the Daily Sun at his Ashoka Road official residence, BJP lawmaker and national vice-president Vinay Sahasrabuddhe, said “Bangladesh has its own reasons and China had its own, which is of no concern to India.”

He said “Bangladesh and India relations are an organic one, our blood is same, culture is same, our ethos are same, our past is same ... imagine Brahmaputra flows down to Bangladesh to be called Padma.” The two countries, he added “enjoy emotional and geographic bonds.”

“The relations India has with Bangladesh is not comparable to China,” said Sahasrabuddhe, also the president of the Indian Council of Cultural Relations (ICCR) and a former freelance journalist.

The BJP leader said Prime Minister Modi “greatly valued its eastern neighbour and he and Prime Minister Sheikh Hasina have a great chemistry, and nothing could be more ideal than this in furthering bilateral ties.”

This is the first interview by a newly elected any BJP leader. Saharasbuddhe is known to be a close associate of Prime Minister Narendra Modi and heads BJP’s think tank Public Policy Research Centre (PPRC).

“We are sending various products to your Chittagong port and then by road to the north-eastern states by trucks and it is helping us to save cash, while Bangladesh is earning from the charges we pay for this facilities... it is a win-win situation,” Saharasbuddhe said as a number of his well-wishers presented him bouquets for the poll victory.  One New Delhi-based western economist separately told this correspondent that Dhaka should think on the lines of “sub-regional perspective” to find solutions to outstanding issues with India and also make the best out of the economic prospects it holds.

“Think of the trade and business with north-eastern states and West Bengal —- it can be turned into a huge economic zone that will benefit all,” he said on condition of anonymity.

On the prospects of signing the Teesta river water sharing agreement soon, Saharasbuddhe said “the government has been all for an amicable solution sooner than later. Here a state government (which is a part of the issue) and it has to be consulted.” However, he was unable to give any time frame for a Teesta agreement to be signed.

The western economist said Teesta would be solved more easily and quickly under a sub-regional plan as West Bengal would only share water what is left after it required, but not at the expense its own people.

“Teesta is not only about good relations ... more of a regional matter as water comes down from the Himalayas via China, India and then into Bangladesh” before flowing into the Bay of Bengal, Suhasini Halder, diplomatic editor of The Hindu newspaper told this correspondent.

Asked what did the citizenship act meant and that BJP’s West Bengal leader have repeatedly spoke tough about migrants “from Bangladesh,” the senior BJP lawmaker Vijay Suharasbuddhe brushed aside any seriousness of the issue and said it was initiated in the 1950s under Jawahralal Nehru and BJP was implementing it only.

“You need to keep track of foreigners entering your country illegally and that is what the government is doing in the north-eastern states ... the issue came to forefront as immigrants were changing the demography especially in Assam... the US is doing it on its Mexican border.”

“There is nothing to do with politics here, but an issue of security and sovereignty.”

Told BJP’s stand on secularism with the opposition accusing it of destroying a basic principal of India’s foundation and recent attacks on the minority Muslim community, Saharasbuddhe said the attacks were being carried out by “miscreants.”

“Certain elements are trying to create a situation as it is just after the election and it will stop,” the senior BJP leader said reflecting on Modi’s announced policy of “inclusiveness” and “gaining confidence of the minorities.”

“Everyone condemns such acts and none will defend it ... these are more political than factual,” retorted Saharasbuddhe.

He blasted political parties who spoke of secularism, saying “these are misinterpretations and are pseudo secularism to make a plank to win over minority voters ... cheap political tactics. BJP is for approving triple talak (of the Muslims) but those preaching secularism opposing it.”

“These forces could not cash on these kind of politics and thus minorities also voted BJP,” Vinay Saharasbuddhe added.

Asked would India would assist Bangladesh needed on security issues like conspiracies by Pakistan to unseat Prime Minister Sheikh Hasina, he said “Our position is crystal clear that terrorism has no place in modern society,” adding that help only “should Bangladesh seek such assistance.”