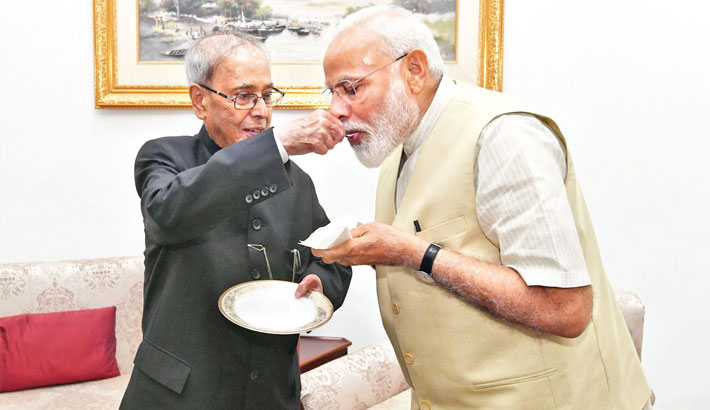 Former Indian President Pranab Mukherjee congratulates Narendra Modi on his party’s election victory by offering sweets. Modi called on Pranab Mukherjee at his residence in New Delhi on Tuesday, two days before he will take oath as new prime minister.

Narendra Modi on Tuesday called on former president Pranab Mukherjee at his residence in New Delhi and invited him to his oath ceremony to be held on 30 May.

Modi also sought his blessing and advice while meeting with the former president.

He made the visit just two days before his oath as Indian Prime Minister for the second consecutive term.

He visited Rajaji Marg, the residence of Pranab Mukherjee, to invite him to his oath ceremony.

Pranab Mukherjee was so overwhelmed to see Modi at his residence that he expressed his feelings by feeding him sweet.

During his meeting with Pranab, Modi sought his guidance and suggestions in the states affairs.

Bharatiya Janata Party (BJP) secured a clear majority with 303 Lok Sabha seats. The figure is 22 more than its 2014 tally. BJP and its allies nominated Modi to lead the government.

“Meeting Pranab Da is always an exciting experience. His knowledge and insights are unparalleled. He is a statesman who has made an indelible contribution to our nation. I sought his blessings during our meeting today,” Narendra Modi said in his tweet.

Earlier on Saturday, Modi was elected as leader of the NDA in a ceremony at Parliament’s Central Hall. Later, he met President Narendra Modi will take oath as the Prime Minister for a second term on May 30.

Since leading the BJP to a victory in the Lok Sabha battle, PM Modi has been meeting senior leaders ahead of his swearing-in on Thursday.

A day after his win, PM Modi had visited BJP veterans LK Advani and Murli Manohar Joshi, and sought their blessings.

PM Modi led the BJP to an epic victory on Thursday. It won 303 seats out of 543 in the Lok Sabha.

The oath ceremony at the Rashtrapati Bhavan will be attended by leaders of the BIMSTEC member countries, in line with the government’s “Neighbourhood First” policy, the foreign ministry said in a statement.

The notable omissions in the neighbourhood are Pakistan and its key ally China.

Bangladesh Prime Minister Sheikh Hasina has planned to make a 12-hour stopover in New Delhi on June 8 on her way back home after wrapping up her tri-nation visit to Japan, Saudi Arabia and Finland.

There is likely to have a “goodwill exchange” between Prime Minister Sheikh Hasina and her Indian counterpart Narendra Modi during her brief stay in New Delhi, said a diplomatic source.

Bangladesh President Abdul Hamid will reach New Delhi by a special aircraft Wednesday evening. He will stay at five-star hotel Taj. Modi may come to the hotel to meet him the next day.

However, the guests will attend a dinner after the oath. Prime Minister Modi will leave Delhi for Maldives on June 7. In the last week of June, he will attend G-20 summit.