An Autopsy of Indian Parliament Election 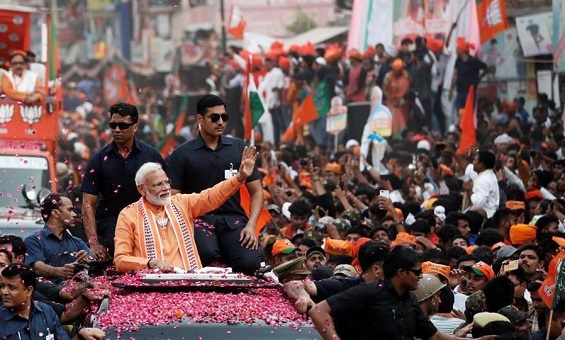 The recently held Parliament election in India has been in discussion among people having an interest in politics. A school of thoughts was apprehending that BJP would find it difficult to retain power while another school of thoughts was of the opinions that the BJP might come out as the single largest party and thus might require support from other NDA partners to form a coalition government. But all speculations proved wrong on the morning of the 23rd of May as the trend was indicating a massive win for NDA which was in line with the results of the exit polls.

The final result shows that the BJP led by Narendra Damodardas Modi has come out even stronger than 2014 election by winning 303 parliamentary seats alone while the total number of seats being won by the NDA crossed the 350 marks. No political party could manage to win more than 300 seats in the last three decades where the magic figure is 272. From this perspective, the result has put BJP in an expedient position as they would be able to implement some of the reforms that were instantiated during 2014-2019. Now a pertinent question is what factors have helped the BJP to bag such a win in the election.

As a matter of fact, among a number of factors that have influenced the voters to keep their faith in BJP is the personal image of Mr Modi factor who has outscored the images of all opposition leaders. Mr Modi has placed him in such a stature that has become so high for Rahul Gandhi who was projected later by the opposition grand alliance as the possible Prime Minister candidate. The Congress also tried to use the glamour of Priyanka Gandhi to win the election but that also failed.

The national security issue has been playing an influential role in all pools since the 1990s in India. But this issue did not come strong until the strike of a jihadi suicide bomber in Pulwama that killed a number of CRPF troopers. Although the opposition political parties tried to use this incident as a failure of the government to ensure the security of the state, the claim did not last long as a reciprocal air strike on Pakistani mainland presented Modi as a ‘bold and decisive leader.’ The majority of the countrymen started to believe that the security of the nation can remain safe in the hands of Mr Modi, who also tried his best to play with the emotion of the countrymen through the nationalist movement card. This has engrossed the majority of the voters who have perceived him as a strong leader capable of ensuring stability in the country.

The BJP government’s success to control the price rise and inflation against the UPA’s failure in this regard along with corruption debacle five years ago might have influenced the voters to keep their faith of Modi and the BJP. Of course, the government’s strategy to control the price rise by plummeting the price of farm produce created deleterious image among the rural people in general and the farmers in particular. The Congress could manage to use this issue in the assembly polls in five states that took place in November-December 2018. But, the BJP leadership along with the Prime Minister paid extra attention to repairing the destruction by providing monetary assistance to placate the angry farmers before the election. This strategy seems to have worked in the election as the UPA headed by the Congress has failed to come up with an alternative plan to convince the farmers to take their face against the BJP. Thus, despite having some adverse impact, the issue did not work against the ruling alliance.

Religious polarisation in the form of Hindu nationalist movement might have helped the BJP to win by such a giant margin. The BJP strongly believes in Hindu Nationalism that helped the party to win in 2014. Mr Modi was perceived as the pro-Hindu nationalist leader when he was the chief minister of Gujrat for four consecutive terms. When he became the Prime Minister of India, he could manage to keep the ideology away from him. But, before the election, BJP leaders and Mr Modi again played this ‘Hindu Nationalist’ movement card to persuade the majority of the voters of the country. One important issue is that historically Congress has a reputation of ‘pro-minority image'. But that image did not help them to make good results in the 2014 election. That is why they also changed their strategy in the 2019 election. Rahul Gandhi also went to different temples to win the confidence of the Hindu fanatic voters. But, the majority of the people did not accept him as the custodian of the Hindu nationalist movement.

Along with Mr Modi, all India BJP President, Mr Amit Shah, also warrants approbation for his hard work for the last couple of years. Mr Modi and Mr Amit Shah worked together to overhaul the mutilation in different parts of the country where BJP did not do well. Particularly, after the loss in five state assemblies in late 2018, they devoted more efforts to finding strategies to gain the confidence of the voters in those states. For instance, they targeted states like West Bengal where they did not have any strong footing. The election result of the West Bengal shows that the BJP has challenged the supremacy of the ruling Trinomul Congress by winning 18 out of 42 seats. Of course, factors like domination and abuse of power of the Trinomul Congress and the support of the leftist voters to the BJP have helped the party to make such a good result in the state. Different factors have influenced BJP to attain a victory in other states as well.

The opposition political parties tried to use the ‘caste' question to defeat Modi. That is why, they built a coalition with Yadavs, Hatavs, and Muslim represented by SP and BSP with the expectation that they would make a good upshot in Uttar Pradesh which is considered the determining factor in the parliamentary election in India. But none of the plans came out successful.

In the last five years, Modi tried to ensure that his party does not get involved in any sort of corruption rip-off that cost Congress immensely in 2014. Although people had accepted the twin shocks of demonetisation policy and GST, they did not take their face back from the party due to the image of the Prime Minister as an honest politician and corruption bluster.

The opposition grand alliances could not gain the confidence of the voters as they were found very hesitant in highlighting their prime minister candidate. Of course, they finally projected Rahul Gandhi for the position, but they had to negotiate with other alliance partners that created a sense of muddle among the voters. Moreover, the opposition alliances failed to come up with a strong vision that could overturn the visions of BJP.

The election result shows that the BJP has conquered a landslide victory. But, at the same time, a couple of issues have been in discussion. The first is the dwindling strength of secularism in India. The emergence and growth of the Hindu nationalism have put a question mark on the fate of secularism which was one of the strongest features of the Indian democracy. The second factor is that the implementation of the citizenship amendment act 2019 may create problem in different states like Assam, West Bengal and Odisha. The result of West Bengal clearly states that BJP has done exceedingly well in different districts of West Bengal and Assam those have borders with Bangladesh. Thus, it can be predicted that these groups of voters have extended their support to Modi with the expectation that he would implement the citizenship amendment act 2019 that would relinquish non-Indians from their states.

Finally, a pertinent question is what would be the impact of the result of the Indian Election in Bangladesh. It seems that the result would have a mixed impact. First, the continuation of the government is not only good for the development of a country, but also ensures a stable relationship with the neighbouring countries. It is no denying the fact that India and Bangladesh have been maintaining a very good relation for the last few years. Thus, the victory of Modi government would create scope for reaching agreements on different unresolved issues for both the governments. On the other hand, the implementation of policy like the citizenship amendment bill might put extra pressure on the government of Bangladesh. Despite having some negative consequences, Bangladesh would have greater opportunity to work closely with the new government of India.