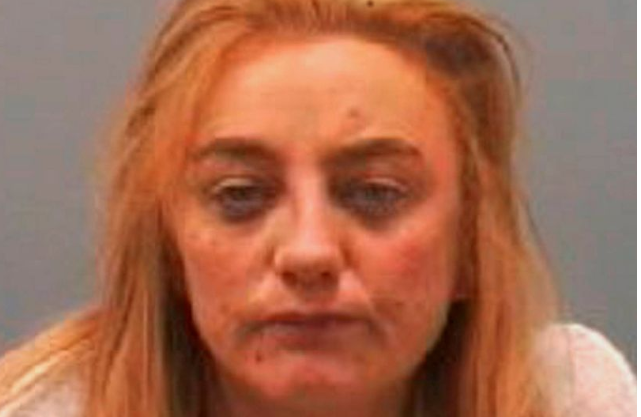 A woman broke her friend's neck after she found them both in a 'compromising position' near their home.

Susan Robson was hosting a social gathering at her home in Kenton, Newcastle with friend Kirsty Adjei-Mensah.

When Miss Adjei-Mensah decided to leave, Robson's husband offered to walk her part of the way home.

Robson, noticing both were missing from the house, became suspicious and went looking for them.

She found them in a lane near her home either about to kiss or kissing, Newcastle Crown Court heard, and flew into a rage.

The 37-year-old "lost the plot", exploded into a violent rage and attacked Miss Adjei-Mensah after her husband had run off.

Newcastle Crown Court heard she punched her, walloped her with her handbag then repeatedly kicked her near her home in Kenton, Newcastle.

The victim suffered a fractured neck, had to have surgery to fit a halo neck brace, which she had to wear for three months and is continuing to suffer pain a year on.

Now Robson, who admitted causing GBH with intent on the basis she lost her temper after finding the pair in what she believed was a "compromising position", has been jailed in tears for four years.

In a victim impact statement read to the court, Miss Adjei-Mensah said: "I thought I was going to die by the roadside.

"I can still see Susan assaulting me and smirking and I can hear the crack as my neck was broken."

Miss Adjei-Mensah told how she had to have the halo device screwed into her skull and said the "pain was unbearable and I was physically sick".

It was in May last year that people had been at Robson's home socialising and drinking.

Prosecutor Emma Dowling said: "There came a point in the evening when the complainant said she'd had enough and wanted to go home.

"The defendant's husband offered to walk her part of the way home, saying he wanted to visit his mother on the way back, which he did."

Robson then went looking for them and saw when her husband came out of his mother's home, he was alone with Miss Adjei-Mensah.

Miss Dowling said: "The defendant formed the view the defendant's husband was about to kiss her.

"The complainant became aware of the defendant and her daughter shouting and screaming at her and the defendant's husband ran off.

"What is clear from CCTV is she was repeatedly assaulted by the defendant in two separate incidents five minutes apart in the same location, next to some garages."

That part of the attack lasted up to two minutes and when Miss Adjei-Mensah got up there was then lull until Robson struck again, kicking her around seven times.

The court heard it's unclear exactly when the top vertebrae in her neck was fractured but said it would require "quite a bit of force".

Police attended and the victim lost consciousness while talking to officers.

Robson, of Kenton, has eight previous convictions, including one for GBH in 2016 when she attacked a woman she accused of jumping a taxi queue.

As well as the four-year prison sentence, she was given a five-year restraining order forbidding her from contacting the victim.

Judge Julie Clemitson told her: "When Miss Adjei-Mensah left, your husband went with her, ostensibly to walk her to the bus stop. After they had been gone for some time, you went to investigate and found them together.

"You discovered your husband and Miss Adjei-Mensah kissing and lost control.

"When your husband ran away, your friend did not and what you saw provoked what was an eruption of violence.

"I accept you did not go out there seeking to cause her harm but on the spur of the moment you clearly were hell-bent on doing so.

"You say you did not deliberately fracture her neck and that I accept but in assaulting her in the way you did and in intending to cause her harm, you have to take responsibility for the consequences of your actions.

"The sight of them together clearly triggered you to behave as you did."

Geoff Knowles, mitigating, said: "There had been contact between the complainant and her husband and she was suspicious of him.

"She noticed her husband and the complainant were missing and she went looking for them and came across them kissing in the back lane and, in some respects, the ticking time bomb referred to in the mental health report, especially at times of great stress and alcohol intake, is what was evidenced in her.

"She simply lost the plot, she was devastated at what she came across.

"It's cost her her marriage, devastated her children and cost her what was a friend at the time."

Mr Knowles said Robson has a number of health conditions, has suffered adversity in her life and is terrified about going to prison.