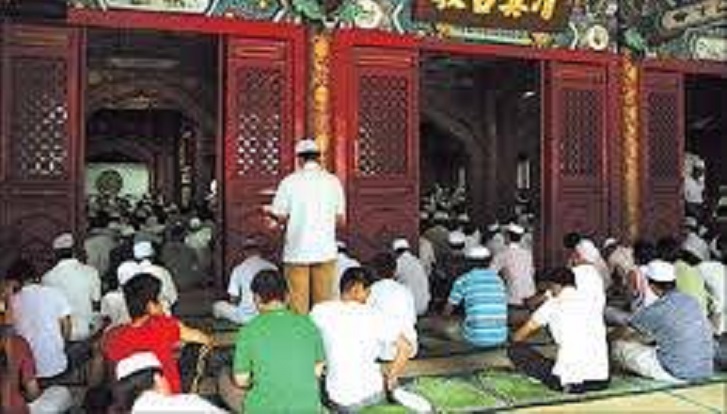 Muslims are praying at a Mosque in China during Friday prayers.

Propaganda machines have long been spreading the myth that Muslims can't freely practice their religion in China and they are subject to worst torture and discrimination by the communist government of the country for their religious identity. Through spreading the myth, the propagandists have successfully been misleading many Muslims around the world about the condition of their religious brothers and sisters in China. That's why guileless Muslims are sometimes seen bringing out processions and staging demonstrations in different countries against so-called and baseless torture of the Chinese Muslims. Bangladesh, which has the third largest Muslim population in the world, is not an exception in this case.  Just a few days before my coming to China last February, I witnessed such a demonstration by an Islamist political party in the capital of the South Asian nation.

Such frequent news of torture and discrimination and following demonstrations have encouraged me to know the real fact and condition of the Muslims in China and that I have thoroughly been looking into the matter since my arrival here in Beijing. Meantime, I have visited several mosques including the oldest and largest mosque of Beijing, Niujie, and offered prayers along with many foreign and Chinese Muslim brothers in those places of worship. From my journalistic perspective, I have also talked to many Chinese and foreign Muslims including an Imam of a mosque about their condition in the communist country.

All they have said is members of Muslim community irrespective of local and foreign enjoy full religious freedom in China. Neither they face any obstacles to practice rituals of Islam nor they are subject to any sort of discrimination for their religious identity, let alone to be tortured by any state and non-state elements in China.

Many foreign Muslims who have long been living in Beijing expressed their dissatisfaction over malicious propaganda campaigns against China about condition of Muslims here. They said sometimes such fake and fabricated news of torture of Muslims draws their attention, but they couldn't find authenticity of the news.

A senior Bangladeshi journalist who has been living in Beijing for last seven years said once a mainstream media outlet published a news story with a photo whose caption read 'Chinese Muslims stage demonstrations against atrocities on them by the communist government of China for observing fast during Ramadan' (the ninth month of the Islamic calendar which is observed by Muslims worldwide as a month of fasting). But the photo was in fact of a rally brought out by Chinese Muslims to celebrate Eid-ul-Fitr, the religious festival that marks the end of Ramadan. This is how propaganda machines distort the fact to mislead and confuse the Muslims around the world about their brothers and sisters in China.

The Bangladeshi journalist said many foreign Muslims regularly offer prayers five times a day, even they sometimes pray in their offices in front of their Chinese male and female colleagues. but Muslims never face any unusual or uncomfortable situation for worshiping. This obviously shows the level of tolerance and respect of the Chinese government and people to Muslim community.

Many local Muslims said though China is a communist country, it doesn't bar any individual from practicing religious rituals and is very open and committed to religious freedom. As a result, a total of 10 Chinese Muslim ethnic groups have peacefully been living along with other non-Muslim groups and practicing their religion without any hindrance and difficulties in the country over centuries. They also never face any discrimination in society for being Muslim.

Talking to an Imam of a mosque in Beijing, I could learn that the communist government of China is not only tolerant to Muslim community but also it provides assistance for welfare of the community. The government bears expenses of mosques including Imams' salaries which is unusual even in many Muslim majority countries.

The vivid example of religious freedom of Muslims is mosques of China which are very vibrant and remain full of devotees during the prayer times. Almost every community in Beijing has a mosque making total number of mosques in the Chinese capital 73. Male and female Muslims are seen praying in those places of worship as they have seperate arrangement for Muslim women. The presence of huge number of male and female Muslims in Niujie Mosque during the Friday Prayer has really overwhelmed me, especially the number of Chinese Muslims as I have never before seen such huge number of them together in a place. During the visit to the oldest Mosque, I could also learn that Chinese Muslims like Bangladeshis enjoy freedom to receive education in internationally-acclaimed Islamic universities in Mecca and Medina, the holiest sites of Islam in the Kingdom of Saudi Arabia. As a Bangladeshi Muslim, I never thought of finding such a huge and vibrant mosque in Beijing which covers 10000 meters area. The Islamic and Chinese architectural mixture of the mosque established in 996 given it unique aesthetic grandeur.

Such widespread freedom in China doesn't depend on the whim of the government, rather the constitution of the People's Republic of China has guaranteed all inhabitants the freedom of religious beliefs in its territory. The Chinese Muslims also constitutionally enjoy freedom of forming and running Islamic organisations and institutions in the communist nation.

Though Muslims in China have no complaints against their government, Propaganda machines are running smear campaigns at full speed. these widespread malicious campaigns are designed to make the Muslims around the world stand against China so as to withhold the constant rise of the East Asian nation in the global politics and that no Muslim should pay heed to the spiteful campaigns.

The writer is the diplomatic correspondent of the Daily Sun, a leading national English broadsheet daily of Bangladesh. He is currently receiving training in journalism in Beijing as a fellow of the China International Press Communication Center (CIPCC) Programme 2019 initiated by the China Public Diplomacy Association (CPDA).