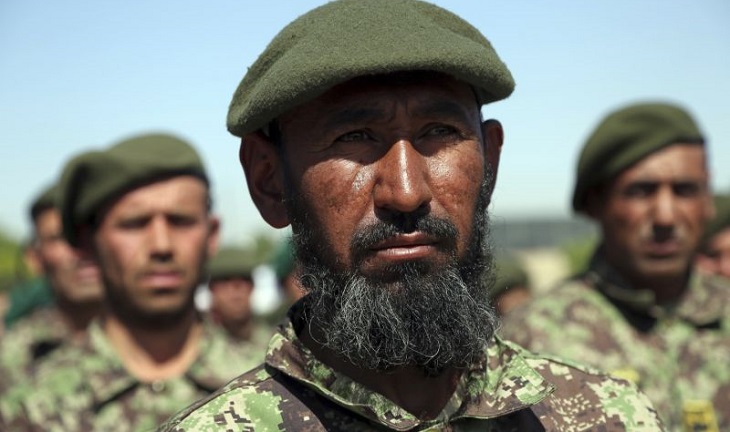 The soldiers were driving back to base after picking up their salaries in the country's western Farah province. They were travelling in a Humvee when the explosion took place on Sunday afternoon in the Bala Buluk district, said Shah Mahmmod Nahimi, a provincial councilman.

"The blast was so intense that no one in the Humvee survived," he added.

The attacks took place on the outskirts of the provincial capital of Sari Pul and triggered gunbattles that lasted for hours, he said, adding that 15 Taliban fighters were also killed.

The Taliban claimed responsibility for the Farah attack in a statement on their website but did not make any announcements about the Sari Pul attack.

Meanwhile, a sticky bomb attached to a minibus carrying government workers in Kabul detonated on Monday morning, wounding 10 people, said police spokesman Ferdus Faramarz. One of the wounded was in critical condition.

Arab Haidari, from the religious affairs ministry, said all the wounded are ministry's employees who were on their way to work when the explosion took place. No group immediately claimed responsibility for the attack. Both the Taliban and Islamic State militants regularly stage attacks in Kabul.

Attacks have increased recently as Washington's peace envoy, Zalmay Khalilzad, presses ahead with talks with the Taliban, who refuse to negotiate directly with the Kabul government.

The talks so far have focused on a timetable for U.S. troop withdrawal as well as Taliban guarantees that they won't harbor terrorist groups or allow Afghanistan to be used as a staging ground for global terror attacks.

Also Monday, the Defense Ministry celebrated the graduation of about 3,000 soldiers following their three-month training program with a ceremony at the Military Academy in Kabul.