Sabbir, Mosaddek in contention to bat at 7 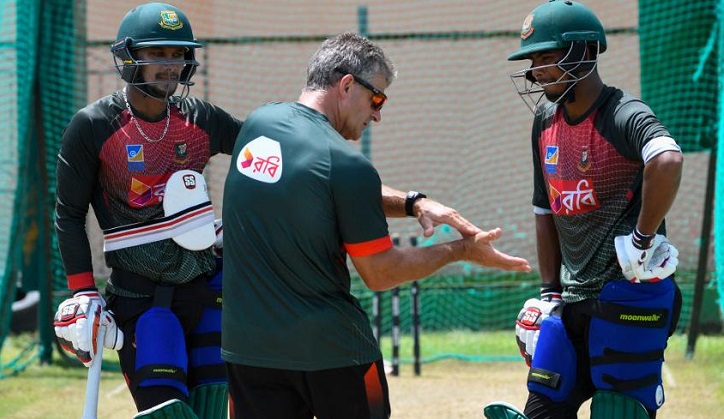 Bangladesh are gearing up for their second and final warm-up game against India on Tuesday. Before that, Sabbir Rahman and Mosaddek Hossain are on the center of contention to bat at no. 7.

Mosaddek was included in Bangladesh's World Cup set-up as a backup option. But he played a historic innings in the final of tri-series in Ireland to help the Tigers win their first-ever title in a multinational cricketing event, which made him an automatic choice for the first choice playing XI.

In the final of the tri-series against West Indies, Bangladesh needed to chase down the target of 210 in 24 overs. Mosaddek came to bat after Mohammad Mithun's dismissal when Bangladesh needed more 67 runs in 50 balls. Mosaddek smashed a fifty off 23 deliveries with five cannon-powered sixes.

That explosive innings helped the Tigers to chase the total of 210 in 22.5 balls and with the first-ever title in a tri-series.

This performance paved the way for Mosaddek to get more concentration from the team management who are currently thinking to prefer Mosaddek over Sabbir to bat at no. 7 in the World Cup.

Sabbir, on the other hand, failed to grab the chance when he got to bat at number three in final replacing injured then Shakib Al Hasan. He fell without adding anything on the board.

However, Mosaddek said he is not thinking to be included in the team for the lean performance of others.

"I don't want someone to play bad so that I can get a chance. I don't think Sabbir is a rival. I want everyone to play well, I want Bangladesh play well. The team is ahead of everything," Mosaddek told media after the warm-up game against Pakistan washed out out due to rain.

On the other hand, Sabbir is confident of doing well if he gets a chance in the World Cup. The right-handed batsman said the after Pakistan match was abandoned.

"I did not get enough to bat in tri-series. The warm-up match was very important for me. But I am very disappointed that we could not play the game. I will try best to perform well if I get a chance in the World Cup."