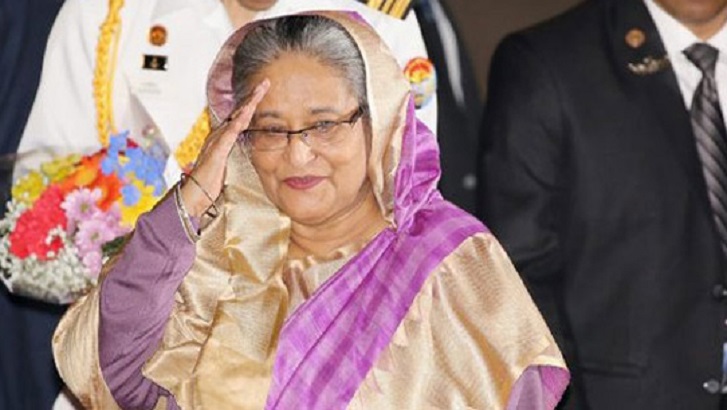 Prime Minister Sheikh Hasina is set to leave home on her 12-day tri-nation tour on Tuesday with Japan being her first destination to be followed by Saudi Arabia and Finland.

In the first tour in Japan from May 28 to 31, the premier will address the 25th International Conference on Future Asia, hold a number of bilateral talks including with his Japanese counterpart Shinzo Abe and attend a signing ceremony.

Sheikh Hasina will join a Bangladeshi community reception to be hosted in her honour, meet with the family members of the Japanese victims of the Holey Artisan attack and Japanese business leaders.

Concluding the Japan visit, Sheikh Hasina will leave Tokyo for Jeddah where she will stay till June 3.

During her stay in Saudi Arabia, the premier attend the opening ceremony of the 14th session of the OIC’s (Organisation of Islamic Conference’s) Islamic Summit titled “Makkah Summit: Together for the Future” in Makkah on May 31.

The premier will perform Umrah.

Upon completion of the Saudi Arabia visit, Sheikh Hasina will depart Jeddah for Helsinki, Finland on June 3 where she will pay a courtesy call on president of Finland on June 4.

She will arrive at Haneda International Airport, Tokyo at 18:30 (Japan time) where Japanese state minister for Foreign Affairs Toshiko Abe will welcome her at the airport.

She will attend a community reception at Hotel Okura around 20:30 (Japan time) on the same day.

On May 29 morning the Prime Minister will attend a breakfast roundtable meeting with Japanese Business leaders and CEOs at Hotel New Otani.

After that Japanese victims of the Holy Artisan incident will call on her.

In the afternoon, she will have a bilateral meeting with her Japanese counterpart Shinzo Abe at his office.

Sheikh Hasina will be given guard of honour when she will reach at the Janapese Prime Minister’s Office.

After the bilateral talks there will be a signing ceremony and a joint press statement.

Later in the evening, she will attend the official dinner hosted by Shinzo Abe at his residence.

On May 30, Sheikh Hasina will attend the Nikkei Conference at Imperial Hotel where Prime Minister of Malaysia Mahathir Bin Mohammad will give the keynote speech.

Sheikh Hasina will then attend the 25th International Conference on the Future Asia at the same venue and deliver her speech.

Later, JICA president Shinichi Kitaoka will call on her at her place of residence.

On May 31 at 9:25am (Japan Time) Prime Minister Sheikh will depart from Haneda International Airport for Jeddah to attend the 14th session of the OIC’s Islamic Summit in Makkah.

Japanese state minister for Foreign Affairs Toshiko Abe will see her off at the airport.

She will arrive at King Abdulaziz International Aiprot at 1725 (KSA time).

In the evening she will attend the opening ceremony of the OIC summit at Safa Palace, Makkah.

Saudi Arabia is hosting the 14th session of the OIC’s Islamic Summit in Makkah on May 31 and on June 1, 12:30am, she will attend the first working session and at 1:30am the second working session.

She will attend the closing session at 2:30am and then join the Suhoor Banquet at Safa Palace.

In the evening she will perform Umrah.

On June 2 morning, the Prime Minister will depart Jeddah for Madina by air and offer Fateha at the Rawza Mubarak (grave) of Prophet Hazrat Muhammad (PBUH). In the evening she will depart Madinah to Jeddah by air.

On June 3 at 1:10am, she will depart Jeddah for Helsinki, Finland via Frankfurt. She will land at Helsinki International Airport at 1pm (Finland time).

On June 4, she will call on Finland President at his official residence.

On June 7, the Prime Minister will leave Helsinki for Dhaka at 6:35pm (Finland time) by Finair.

On her way back to home she will make a stopover in New Delhi. She will land at Delhi Indira Gandhi International Airport at 6:05am. She will leave Delhi for Dhaka by a flight of Biman Bangladesh Airlines at 6:20pm and arrive at home at 9:20pm.