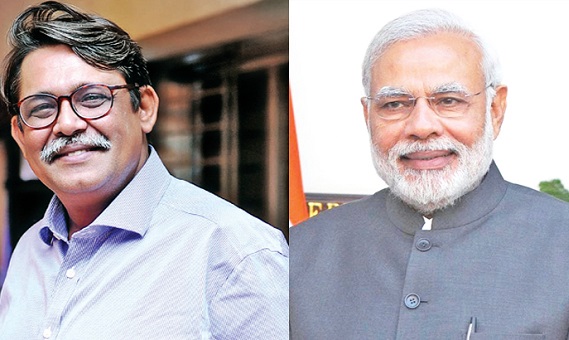 Out of 20 Indians of different ages this author spoke with in this capital city, 18 said they voted Prime Minister Narendra Modi and nothing else! This is what the media is calling a “Modi Tsunami.”

Modi, who was re-elected as the leader of National Democratic Alliance (NDS) ahead of being sworn-in as the head of government for straight second five-year term after an historical and unprecedented election victory, could feel the pulse of the poor and proved his strong leadership skills of which India’s 136 billion people wanted to feel proud.

After covering the 2019 election, hearing commentators on TV channels or meeting some of them, this author feels it was clear that it was a indeed a “Modi election” —- nothing short or less than that. Many agreed that he was a charismatic leader with a clean record and hit the heart of the voters which eventually returned him to power for the straight second time. The only other Indian leader to have achieved that was the assassinated Indira Gandhi – India’s iron lady.

A survey released this week by the Centre for the Study of Developing Societies found that nearly one-third of people who voted for the Bharatiya Janata Party (BJP) did so in support of Modi, rather than the party or their local candidates. Modi’s popularity had grown compared with 2014, when he led his party to the first majority victory in 30 years, the researchers said.

One South Asian diplomat told this author that Modi had targeted the heart of those whose votes would count the most —- the ultra-poor, women and the under 22 youths. He gave ultra-poor women cooking gas, and toilets to Daliths which was interpreted in many positive ways, like he had a heart for the poor, women and the lower castes.

He has said in his victory speech he was clear in saying that there were only two castes – the poor and those who helped them, meaning he has shunned castes or degrading religious minorities as the opposition accused him of.

“The biggest factor behind the BJP’s win was Prime Minister Narendra Modi: nothing else can explain why, across states, stalwarts from the opposition bit the dust. And nothing else can explain why the BJP swept states where the Congress won assembly polls as recently as December 2018,”the Hindustan Times newspaper said in its editorial “Elections 2019 show that 2014 wasn’t an outlier.”

However, The Hindu newspaper, which critiques Modi, admitted in its editorial “For a rediscovery of India” that “For good reasons, this result is being viewed as an endorsement of Prime Minister Narendra Modi’s persona.... Mr. Modi .... has been a catalyst and the alchemist of the transformation in the way India imagines itself.”

Farid Hossain, the Minister (Press) in the Bangladesh High Commission in New Delhi, told this author: “PM Modi has charisma and was able to present himself as the strong leader India needs as well as the electorate has been looking for.”

Indian’s also value his single life and say Modi had none other than to do good for India. “He works 18 out of 24 hours and has not taken a holiday in the past 20 years that he dedicated to India,” said BJP chief Amit Shah.

In his first speech to the NDA lawmakers-elect in the parliament on Saturday, Modi chose his subject and words very carefully, and delivered them in his own fashion which drew almost all who would hear him out.

The premier spoke of making India “great” with advice to his members of parliament-elect to give up “VIP culture,” “arrogance” and not to run after “name and fame.”

About his winning magic, he said “we reached the poor directly ... India has to fulfill its national aspirations and regional ambitions.”

The prime minister carefully chose areas to retort his opponents politely on issues like secularism for which he has been negatively portrayed also by the western media.

He spoke of “inclusiveness” since the election victory rally and made it a kind of a pledge when he said “We have to bring together different communities ... in accordance with the constitution,” an indication of religious minorities like Muslims, which has been under focus since the polls.

“We are all equal and I am one of you ... we need to advance shoulder to shoulder. The election mandate was for a strong leader,” he said.

Senior journalist and author Maya Mirchandani told the NTV that Modi should address the issues he has been accused of as he was not only a BJP or NDA’s premier, but all Indians.

The Time magazine labelled him as a “divider,” while Britain’s prestigious Guardian newspaper wrote Modi “will take India into darkness.”

Author and columnist Sudheerta Kulkarni said the speech was “a statesman like and he welcomed those who opposed him ... If that becomes true then it will strengthen India.”

Thus after a long and bruising election campaign, and a seven-phase staggered voting which saw ugly debates not seen in India before, most analysts believed the prime minister was trying to cool the temperatures and usher in a “togetherness” for taking “India to new heights.”

The NDA and Modi were careful in hiding about their failed promises like creating new employment opportunities as a newspaper here quoted a leaked document revealed that unemployment stood at the highest in 45 years. Data showing that farming incomes had plummeted to their lowest point in 18 years confirmed the distress of agricultural workers, many of whom committed suicide, who staged protest in Delhi ahead of the polls.

Analyst said the young found a strong leader in him as he not only reacted with strong words after the killing of 40 Indian soldiers by the Pakistan-based internationally banned Lashkar-e-Taiba militants, but also sent his fighter jets into Balakot killing militants and destroying their hideout.

Modi also got a walkover due to Rahul Gandhi’s lack of leadership and opposing the government on some popular issues, which sent a wrong message to the electorate.

“He blundered when he or his Congress questioned the attack on Pakistan and appeared to be half-hearted,” one analyst said.

Thus he had a huge advantage over Gandhi in giving a “strong leader face” to the Indians, not only to the young.

Taxi driver S. Singh sang and cracked jokes about Rahul Gandhi and praised Modi as he drove this author from the BJP headquarters to his hotel.

“We will have a great India now ... good days are coming as we have a strong leader who smashed Pakistan ... During Congress rule, they never retaliated, but cowed down quietly in the name of solving issues peacefully,” he said.