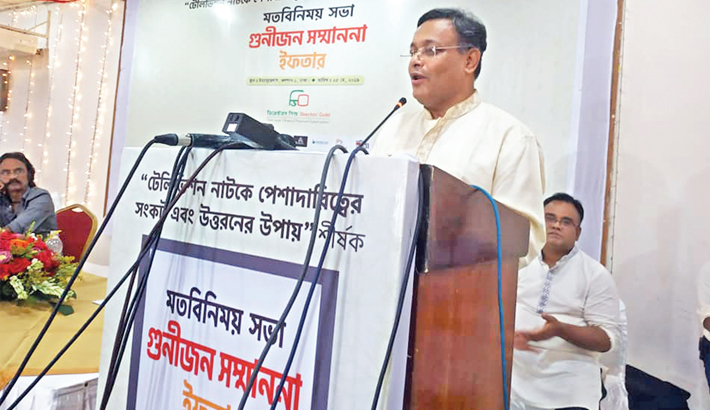 Time was when television drama was the genre of choice for the middle class’s entertainment, and Bangladeshi ‘natok’ was known to maintain a certain standard.

Now though, despite a proliferation of television channels, tv drama is losing its audience day by day, and the crisis can be said to be peaking at the moment, following the advent of the latest threat to in the form of web services such Netflix.

To shed light on possible solutions through an open discussion among stakeholders in the presence of Information Minister Dr. Hasan Mahmud, a seminar and iftar mahfil was organised by the Director’s Guild, an association of filmmakers, titled ‘The crisis of professionalism in television drama and its solution’ at Gulshan’s Emannuels Banquet Hall on Saturday, reports UNB.

The programme featured a serious discussion regarding the ongoing crisis in the television industry. Several media personalities expressed their grievances and disappointment over issues such as getting dominated by unprofessionalism in the industry, not getting proper recognition and remuneration, not getting sufficient opportunities to show their caliber due to the autocracy of media owners, etc.

After giving them a patient hearing, the information minister expressed his solidarity and gratitude towards the artistes and association members, and promised the government is working to prepare proper law and regulations in order to resolve the problems.