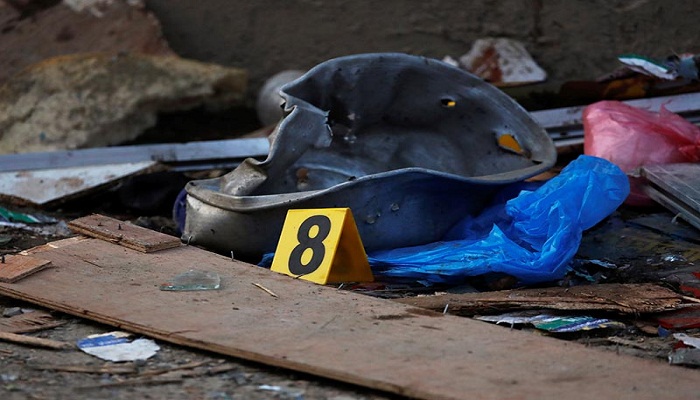 A string of blasts struck Kathmandu valley today, killing at least four persons and leaving seven others injured, three of them critically.

The bombings were the deadliest since the government imposed a ban on activities of Netra Birkram Chand-led Communist Party of Nepal on March 12 following a blast outside Ncell office in Nakkhu that killed one person. Though no one has claimed responsibility for the blasts, Nepal Police suspects the hand of CPN.

These bombings also come on the eve of Nepal bandh called by CPN.

A cadre of Chand-led outfit was killed on the spot and another was injured after a powerful bomb went off on the ground floor of a rented house in Ghattekulo at around 4:30pm. The deceased has been identified as Prajjwal Shahi and is said to be the leader of CPN-aligned student wing in Council for Technical Education and Vocational Training. He was reportedly making a bomb when it accidentally went off, a police source said.

Rabin KC of Rukum, who was a room-mate of Shahi, sustained severe head injuries and is undergoing treatment at the National Trauma Centre under police watch. KC is the leader of student wing of CPN at Tri-Chandra College. A police source told THT that Shahi and KC were making improvised explosive devices to be planted at a public place. Leaflets related to Nepal bandh called by CPN were found in the room during a search.

KC fled the scene and asked a biker for lift to a health facility.

The incident site is around 100 metres from Singha Durbar, where the Office of the Prime Minister and other ministries are located.

Another pressure cooker bomb went off in a barber’s shop at Sukedhara, killing three persons and injuring four others.

One died on the spot, while two breathed their last while undergoing treatment at Om Hospital.

Their identities had not been established till late night. However, police suspect two of the deceased were CPN cadres. Those injured in Sukedhara blast are Hari Khadka, Surendra Maharjan, Jeet Kumar Thakur and Chhotu Thakur. Three of them are critically injured and are receiving treatment at Om Hospital, while Chhotu has been admitted to National Trauma Centre.

Maharjan is the chairperson of CPN-aligned Newa Mukti Morcha in Kathmandu. Police claimed that the group led by Maharjan was using a room rented by the barber to make bombs.

In yet another incident, two persons were injured when a bomb they were carrying on a motorcycle exploded in Nagdhunga of Chandragiri Municipality.

They have been identified as CPN cadres Akash Lama and Buddha Lama. Police said they were receiving treatment at National Trauma Centre under security surveillance.