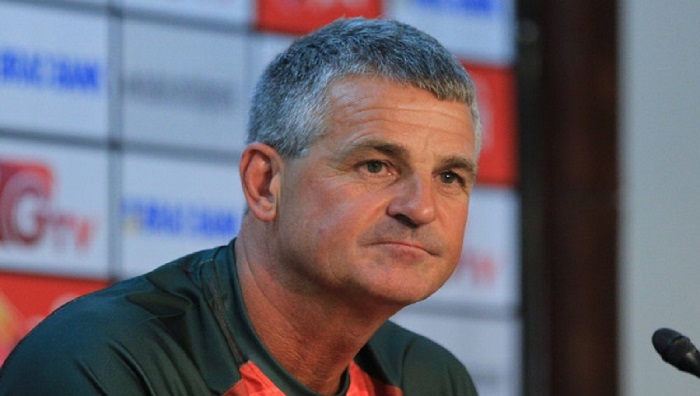 Bangladesh are heading into the ICC Men’s Cricket World Cup 2019 as a confident bunch, and despite a washout in their practice match against Pakistan in Cardiff on Sunday 26 May, they will still be feeling well prepared.

They arrived in Ireland to play a tri-series against the hosts and West Indies, and won that tournament without suffering a defeat. That experience of playing in very similar conditions, and succeeding while doing so, softens the blow of this missed opportunity in Wales. Steve Rhodes, the Bangladesh head coach, feels that his team are in a really good place to do well in the upcoming World Cup.

"One of the things the dressing room feels is quietly confident,” Rhodes said. “But we are well aware that we are playing against some very good teams. We respect the opposition; we don’t fear them. But what we have been trying to do is play that down a little bit, and actually it is great to be an underdog.

Rhodes has been in his role with Bangladesh for just under a year, and he says he has built on what was already in place rather than trying to fix something that was not broken. "The key thing is the team were going in the right direction in ODIs before I got here," he said. "So I had to quickly assess why and how, and then I certainly didn’t want to be a person to stop that growth. I had to adapt my natural coaching style to work with the team. Sometimes that can be a little bit taxing for me.

“But I quickly found out giving a little bit of responsibility to the guys, they are very experienced. I support when I can, realise the ones who want an arm around the shoulder to get the best out of them. But I think the main thing was not coming in and trying to shake things up. It was coming in and trying to see and assess why we were going forward and getting better. And then just enhance that even more."

Rhodes was full of praise for this captain, Mashrafe Mortaza, who has played such a big part in pushing Bangladesh to be one of the top teams in this format. He also mentioned the impact of having Bangladesh’s Twenty20 Internationals captain, Shakib al Hasan, in the team as being important for the side’s chances.

“Mashrafe leads in a warrior-like fashion," said Rhodes. "He is very much the person at the front, very much the person that people respect. He wouldn’t ask anybody to do something that he couldn’t do or wouldn’t try himself. If he wanted to run through the wall, they would give it a go. And I know that is a great attribute for a captain. I try and support him in some of the areas, just try and work on our relationship a lot, and it seems to work quite well.

“The other one is Shakib in the different formats. [They're] different types of captains. Shakib is a tactical captain with immense knowledge of opposition, and what to do at the right time. So my working with them two is, actually, I work in a very different way. But again, it is to get the very best out the situation, the relationship, and for Bangladesh cricket. It is not me dictating what is going on, it is making sure the bus has stayed in the right direction.”

It isn’t just as an on-field leader that Shakib offers extra to his team – he is one of the very best players in the world. "Shakib is world No.1 in ODIs as an all-rounder,” Rhodes said. “The next, probably nearest, might be Mustafizur [Rahman] with the ball at 10, something like that. So he is really our only one in that top bracket. It doesn’t mean to say we haven’t got good cricketers.

"Just interviewed here was a guy who replaced Shakib in the final against West Indies in the tri-nations, and had a magnificent game – fifty-odd off 20-odd balls to win, that’s Mosaddek [Hossain]. So he replaced Shakib in that top seven, and bowled spin. So we have managed to do OK without Shakib.

"But when he [Shakib] doesn’t play, it can cause a few issues. Not only [in] missing the best player that you have got, but also your balance of the team. Because he is such an important batter and bowler, as well as person because of his tactical ability.”