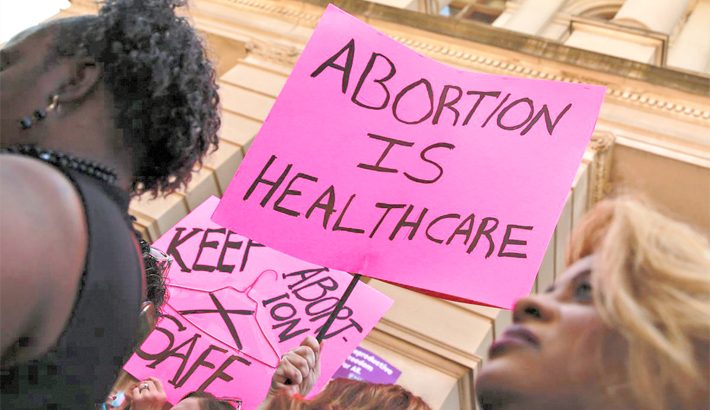 Reactions of people from all spheres of life around the world, following the law passed against abortion in Alabama was phenomenal. Celebrity/ feminist tweets and memes have been spreading all over the internet, like wild-fire. Since Bangladeshi liberals are no exceptions in standing against rigid anti-abortion laws, I found it timely to discuss our existing regulations that relate to abortion.
Statutory laws restricting abortion
The punishment of crime regulated by the Penal Code of 1860 in Bangladesh clearly in its sections from 312 to 316, mentions punishment of causing miscarriage, causing miscarriage without women's consent and death caused by the act done with intention to cause miscarriage. Also, the sections make no exception, even for women from being criminally liable for performing miscarriages on themselves. According to the code, abortion is only allowed, in case the pregnant women's lives are at stake.
A solace
As part of the family planning programme in Bangladesh since 1979, menstrual regulation has been allowed. It is a procedure that uses manual vacuum aspiration to make it impossible to be pregnant after missing a period. Hence, it can only be performed with a maximum limit of 10 – 12 weeks after a woman’s last period and without a test to confirm pregnancy. The procedure is simple and can be carried out using inexpensive equipment, without the use of anesthesia.
Although menstrual regulation centers are centralised and free of charge, many women still lack access because of socioeconomic barriers and social stigma in Bangladesh. Moreover, most women are unaware of menstrual regulation or are in the face of male opposition to such procedure. As a result, some women turn to illegal abortions.
Liberalism proven worthy
Existence of menstrual regulation itself, alongside the implementation of such is definitely commendable, in a Bangladesh that only seems to be moving towards conservatism more and more. Other than statistics that show steep decline in maternal deaths, as the implementation of menstrual regulation became more efficient and accessible with time, existence of the regulation has proved to have been fruitful enough to have taught the world a lesson in recent past.
The massive influx of Rohingyas in Bangladesh included women who had become pregnant as a result of rape by the barbaric military of Myanmar. Subsequently, Bangladesh was duty-bound to intervene, planting the seeds for a safe abortion service, such as menstrual regulation, that continues today in the camps for Rohingya refugees.
In spite of regular cut-downs on foreign aids, NGOs in Bangladesh are implementing menstrual regulations, fortunately the successive Bangladeshi governments kept the programme running – as a result, standard abortion care medical services could have been provided with the equipments and expertise, which were already place.
So how has menstrual regulation been exempted from the restrictive ban on abortion in Bangladesh? This is probably where our own history has a role to play, in spite of us being citizens who possess strong religious sentiments. During our War of Liberation in 1971, as many as around 400,000 women were subject to rape by the military of Pakistan and local war collaborators. Father of the nation and the first President of Bangladesh, Bangabandhu Sheikh Mujibur Rahman had honoured the victims as “heroines of the war” and called upon the people to acquire the same mindset, so that rape survivors refrain from committing suicide, kill their newborn babies or die from inducing abortions on their own. Hence, Bangabandhu’s government had temporarily waived its ban on abortion for victims of wartime rape, while also bringing in foreign doctors for the purpose of terminating unwanted pregnancies.
Upon the gruesome murder of Bangabandhu, who had foreseen a liberal and tolerant Bangladesh, a more conservative administration had failed passing a bill to legalise abortion in 1976, although as previously mentioned, 1979 had offered somewhat of a loophole – a backup to contraceptive failure for a woman who has missed her period, menstrual regulation was conceived as a means of reducing harm without engaging the law.
The debate
For years now, abortion has been a burning issue to debate on. As nations have started to tilt towards conservative administrations, ensuring abortion in special circumstances (in cases of rape, minors, etc) have become a challenge, let alone considering the will of a pregnant woman. Of course, the right to life is important, but, if according to doctors worldwide, a fetus can feel no pain until the third trimester of a woman’s pregnancy, authorities might as well start taking steps to waive such a restrictive ban on abortion.
Amidst countless mishaps and blunders from the government’s end, the Sheikh Hasina administration is fortunately known to be pro-women and liberal. Hence, if not immediately, I fail to envision another leadership in the near future, which would bring amendments to the age old Penal Code.
It is indeed needless to say that, as a nation, having experienced the sufferings of our mothers and sisters in 1971, we should be open to the idea of abortion and begin to stop believing that fetuses of all ages have the 'right to life', so much so that, even rape and minors are no concerns.

The writer is a Lecturer, Department of Law, North South University