Trump in Japan: Sumo, barbecue and an imperial audience 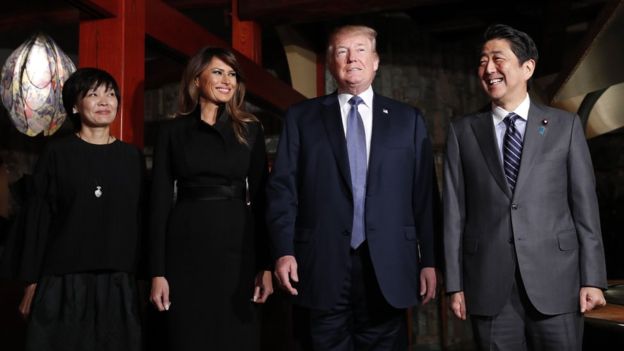 Among the current crop of world leaders, US President Donald Trump and Japanese Prime Minister Shinzo Abe have something of a unique relationship.

The pair are regular golf buddies and Mr Abe has not missed any opportunity to interact with Mr Trump: they have had more than 40 conversations - in phone and in person - during the Trump presidency.

The US president has said Mr Abe nominated him for the Nobel Peace Prize - a claim that Tokyo neither confirmed nor denied.

Mr Abe was in turn praised by Mr Trump for their "very, very good chemistry" and his "strong hands" after an oddly long handshake in the White House in 2017.

As they meet yet again this weekend in Tokyo, Mr Abe is pulling out all the stops to woo Japan's closest ally. 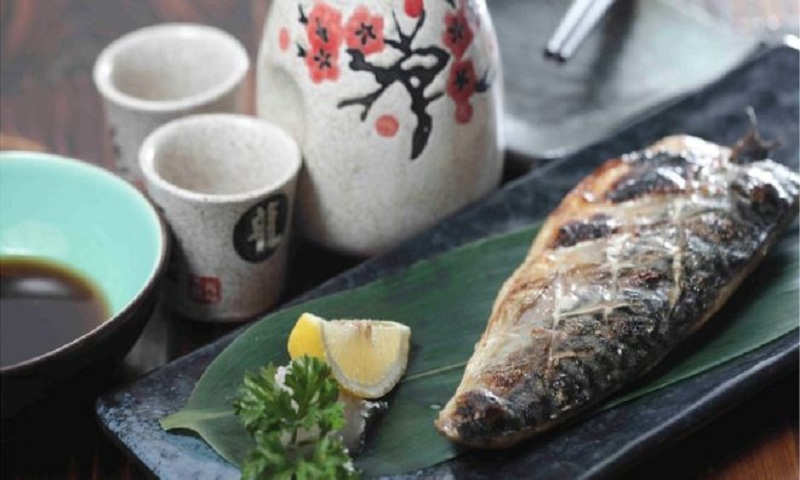 A dish of grilled fish with a side of trade politics?

Out on the town

During the three-day visit, Mr Abe will take his US counterpart for a barbecue dinner at a local restaurant.

It's in line with the tradition of Japanese leaders taking US presidents out to sample local cuisine. Casual dining is often used as a way to break down the rigid and formalised routines in Japanese business negotiations.

So what's on the menu for Mr Trump? Robatayaki - food prepared on a traditional Japanese charcoal grill.

"Going to a robatayaki restaurant is a very visual experience, it has a theatrical point to it," Tokyo-based food journalist Phoebe Amoroso explains.

"There's seasonal vegetables and seafood all laid out for you. You pick what you want to eat and then it's prepared for you on this charcoal grill. It's quite a performance and visually very striking."

It's thought the two will head to Tokyo's Roppongi nightlife district for their dinner - with their wives and a considerable entourage in tow. 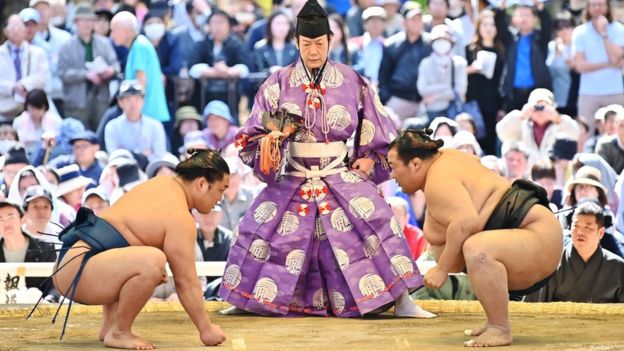 Obama was served sushi in 2014

While Donald Trump's love for US fast food and steaks is well known, it's not the first time that Mr Abe has treated him to Japanese delicacies. Though grilled meat seems to be a recurrent theme.

In 2017, the two had teppanyaki in a local restaurant, that's a steak dinner grilled on an iron plate.

"Going to a local restaurant shows a bit more of Japan and its culture," Ms Amoroso says. "And there is a huge sense of pride over this.

"Japanese cuisine is very much seen as representing Japanese culture and there is a sense that Japanese food is a way to promote Japan to the world."

While Mr Abe is putting on steak and barbecue for Mr Trump, it was sushi for Barack Obama in 2014.

There's been speculation over whether he actually finished the dishes by celebrity chef Sukiyabashi Jiro, but he allegedly told Mr Abe it was the best sushi he'd ever had.

Way back in 2002, then-Prime Minister Junichiro Koizumi took President George W Bush out to an izakaya, essentially a Japanese pub for casual after-work drinking and food.

An audience with the emperor

Mr Trump's visit will of course be about more than just food and golf.

The US president will also be the first foreign leader to meet Japan's new Emperor Naruhito, who only ascended to the throne earlier this month. And Mr Trump is very happy to have that honour.

There will also be a state banquet to round off the visit - where the pomp and circumstance missing from the barbecue will come in.

Mr Trump is no stranger to combat sports and has made several appearances in the colourful world of televised American wrestling.

But in Japan he has been invited to play a role in a far more symbolic and revered event - a sumo wrestling competition.

He will present the "Trump Cup" to the winner of the Summer Grand Sumo Tournament in Tokyo on the final day of the competition on Sunday.

Apparently, he has been given special permission to sit on a chair, rather than the cushion normally offered to those with a ring-side seat.

And sumo fans are said to be split over the role he will play.

Mr Abe has assiduously courted the US president - who has made no secret of his unhappiness that the US provides a costly security umbrella to allies in East Asia.

During his visit, he will tour a Japanese warship - the JS Kaga - in what analysts say will be a symbolic recognition of Mr Abe's efforts to boost Japan's self-defence forces.

The US alliance is Japan's most important foreign friendship, but Mr Trump's America First policies and ongoing negotiations with North Korea have left Japan fearing it might be left out in the cold.

Mr Abe will want to discuss how Tokyo can contribute to future negotiations given that Japan is in Pyongyang's immediate line of fire.

The biggest issue at the moment though is trade and Mr Trump's efforts to re-balance what he sees as unfair economic relationships with major partners.

And while much of the focus is on the China-US trade war, Japan is also very much affected. Mr Trump is planning auto import tariffs that could hurt one of the pillars of the Japanese economy.

Fresh data has just shown Japan's trade surplus with the US growing for a second month, with auto exports on the rise. This will likely harden Mr Trump's position.

As a result, all the pageantry Mr Abe is putting on may make little difference.