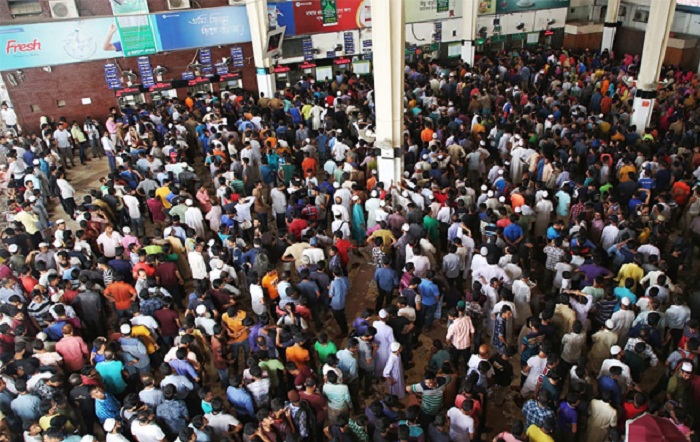 Kamalapur Railway Station in the capital is witnessing a huge rush as homebound people thronged there to collect advance tickets ahead of the Eid-ul-Fitr.

The huge rush was observed as Sunday (today) is the last day for collecting train tickets. Homebound people  were collecting tickets for June 4.

Many ticket aspirants said they were waiting for long hours (20/22 hours) to purchase tickets as there were long queues.

A number of passengers informed that they were not getting tickets as the demand of ticket was very high.

The unsold tickets of online and counter from May 22 to May 26 will be sold from May 28 at counter and though app. The Eid journey will begin on May 31.

There is allegation about railway app that many ticket aspirants could not mange tickets despite fares have been paid by them for desired tickets.

Bangladesh Railway (BR) Joint Director General (operation) SM Mia Jahan said “The allegation against railway app is not authentic. We are selling tickets every day. The number of tickets is limited compared to passengers. Under this circumstance, it is not being possible to issue tickets for all.”

It is mentioned that members of police, Rab, railway security force and intelligence personnel have been deployed in and around the station to maintain law and order situation and check sale of tickets in black market.