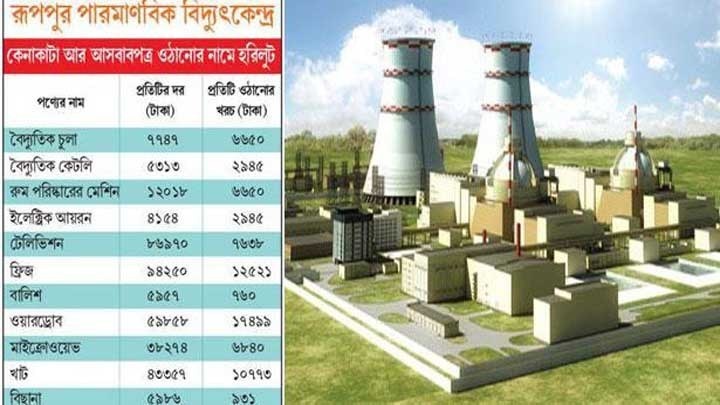 The Prime Minister is two in one in that she is an individual and at the same time represents country’s highest executive office. Whatever she does as the executive head, she has to do it through some procedural formalities. Most importantly, our honourable Prime Minister like any Prime Minister of the world has to work with a team. Once the teamwork does not function well, she is bound to flop. The point talked above is not an isolated truth at all. Rather, this universal truth has come true time and again irrespective of time, place and persons. For example, once there is a corrupt official in prime Minister’s most efficient office team, it is not practically possible to spot the odd person unless the person in question surfaces himself/herself through his/her action.

Rooppur pillow scam is talk of the country at the moment. What the Prime Minister has to do with this biggest ever scandal of the country? The whole episode revolves round the purchase of pillow for the officials and employees working in the project. Not only the pillow but also the purchasing price of all furniture and necessary home appliances as have been shown in the list are just far from being what is considered to be normal by any standard of present market price whatsoever.

Now the case in point is that the estimate is not prepared and approved by the Prime Minister’s office. So it will be an absolutely wrong allegation to concern the Prime Minister and her office in this abnormal ever price scandal.

The other side of the coin is worth reading to have a slice of Prime Minister Sheikh Hasina’s enveloping patriotic mind. Upon hearing the money misappropriation episode, the Prime Minister has suspended all bills of the Rooppur project. Since the case is now under full investigation, we have to wait with a little more patience to see what punishment is being dealt to the real criminals and villains who have tried to embezzle people’s money. It is heartening to note that on the prima facie charge of irregularity, the executive engineer of the Rooppur Project Mr. Masudul Alam has been closed.

We are customarily accustomed to indulge in blame game culture not knowing even the least about fact. Whenever an unpleasant incident occurs, we put the blame straight on the head of the state caring a straw about the procedural modalities of the incident. For example, any institutional irregularities fall under the monitoring jurisdiction of the institution concerned. Besides, the filtering process of the administrative hierarchy is meant to out any irregularity if any. In fact, each and every institution is well covered by system monitoring mechanism administered by the local or home management.

Once the slightest breach in the monitoring network escapes the surveillance eye of the management stationed in the institution in question, the whole management has to share the responsibility of the failure although the proportion of the liability will, of course, differ from person to person. How will the Prime Minister sitting in the capital will monitor and control the everyday affairs and happenings inside the Baropukuria coal mine project or Maddhapara Granite mining project?

But it is an irony of fate that all blames and allegations first and always go to the Prime Minister. Yes, as an executive head of state she has her share in the accountability yardstick but that does not in any way mean that it is she who is behind the irregularity. There are full-functioning legal system, law courts, anti-corruption body like ACC and the law-enforcers who are supposed to look into the irregularities of both individuals and institutions. Only if the Prime Minister patronises or influences or encourages any irregularity and if it is proved unquestionably, only then the Prime Minister can be held personally responsible for the irregularity.

Even the whiteness of the most trusted and honest person may turn black instantly at the slightest provocation of temptation. Any team member with who the Prime Minister is working may turn traitor or may involve in any scandalous affair for which the Prime Minister has nothing to do. It is not only Prime Minister alone who is becoming the scapegoat of country’s all irregularities and anomalies, all executive heads of state in the past had to face the same blame even though they were not involved in any of those for which they were blamed.

During Prime Minister’s four consecutive terms in the office, there has been not a single instance of her personal involvement in any irregularity. Rather, her most courageous decisions such as her zero tolerance stances against drugs and corruption have earned for her laurels from across the globe. In addition to her mega success in development works, she has visibly upgraded the image of the country deep from the rock-bottom of corruption.

I will definitely agree with many others on the point that irregularities are being perpetrated in some institutions but I will not least allow the view that the criminals escape scot-free or enjoy full immunity. As per records, more than 85 per cent reported cases are taken into serious legal cognisance. 100 per cent or absolute success is a near impossible achievement. However, 85 per cent to zero per cent success is quite a tremendous success figure that has to be positively accounted for. Exceptions or failures are quite a human manifestation once the scale and range is limited and tolerable.

We have to come out of this self-disgracing morbid culture of putting one’s blame on the other which not only disgraces ourselves but also dwarf our global stature as a nation. Instead, we have to wait patiently until the legal process comes to a natural end. We may of course call for quick disposal of these graft and corruption suits with topmost priority.