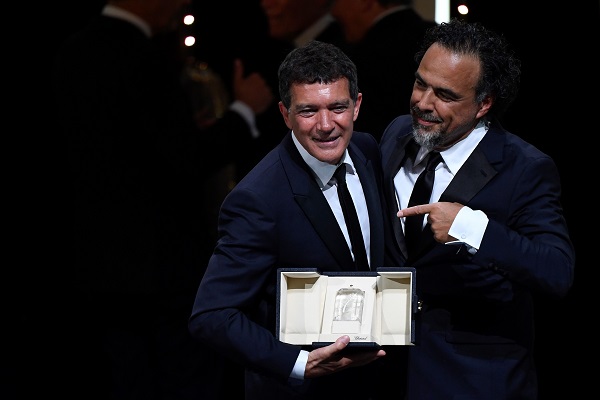 "Almodovar is my mentor. We have been friends for 40 years... I saw things in the script that I didn't know about him. He was very sincerely confronting himself in front of an audience in the film," the actor said.

South Korean director Bong Joon-ho won the Palme d'Or top prize with "Parasite", a bravura satirical morality tale about the widening gap between rich and poor in his homeland.

Bong, 49, is the first Korean to ever win the top award at the world's biggest film festival.

He called his longtime leading actor, Song Kang-ho, whom he described as his "alter-ego" onto the stage to receive the award with him. "I was a little boy who was crazy about cinema since I was 12 years old," he said.

This year’s Palme d’Or race consisted of 20 movies, several of which were from previous Palme d’Or winners such as Terrence Malick (“A Hidden Life”), Quentin Tarantino (“Once Upon a Time in Hollywood”), Ken Loach (“Sorry We Missed You”), and the Dardenne Brothers (“The Young Ahmed”). Whichever film wins the Palme d’Or will follow last year’s pick “Shoplifters,” the acclaimed Hirokazu Kore-eda drama that went on to earn an Oscar nomination for Best Foreign Language Film at the 2019 Oscars.

Following is a list of the prize-winners at the 72nd Cannes film festival:

- Special mention: "It Must Be Heaven" by Elia Suleiman

- Best screenplay: "Portrait of a Lady on Fire" by Celine Sciamma (France)