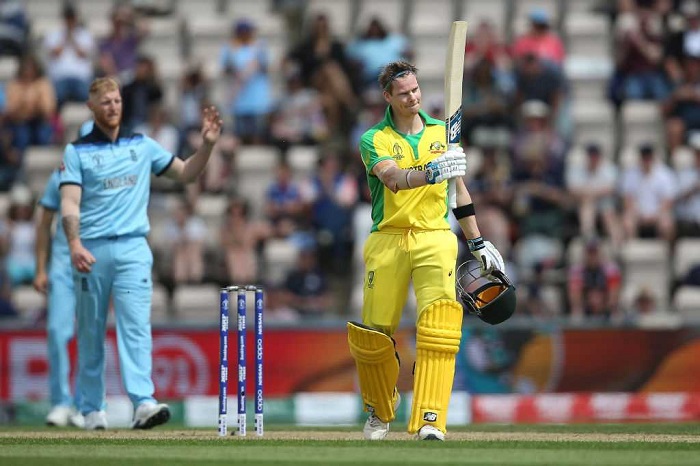 Australia wrapped up a close win over tournament favourites England as they sealed their warm-up tie by 12 runs in Southampton on Saturday (May 25). If Steve Smith's 116 propped up the side to 297 for 9, the bowlers produced a clinical show to keep the hosts to 285 despite half-centuries from Jos Buttler and James Vince.

England, by their lofty aggressive standards, made a rather cautious start. Though they didn't lose a wicket, just 22 came in the first five overs as both Jason Roy and Jonny Bairstow looked to settle in. The latter, though, failed to get going and fell for 12. Roy too didn't last long as England lost their openers with 65 on the board. Ben Stokes, sent at No. 4, failed to get a decent hit out of the game as he was spun out by Nathan Lyon for 2. At 100 for 3, it seemed England chase was heading nowhere. While Vince looked in good touch, the chase was resurrected by Buttler.

The England captain on the day raced to his half-century off just 30 balls as Australia were caught napping. It was Nathan Coulter-Nile who nipped out the threat on the very next ball after Buttler celebrated his half-century. Vince made 64, off 76, but became Jason Behrendorff's second victim as the England chase nose-dived further. Chris Woakes, playing just as a batsman, joined Moeen Ali as the equation came down to 61 off the last ten overs. England's batting depth kept them in the game but the dismissal of Moeen and then Tom Curran kept Australia just ahead.

England needed 24 off the last three overs and that's when the moment of the game came in. Woakes's run out in the 48th over proved decisive as Stoinis squeezed the chase to give Australia another confidence-boosting win ahead of the tournament.

Earlier, Australia were propped up by the century of Steve Smith as the fought hard in the middle overs and lifted the side to a challenging total. Both Smith and David Warner were greeted with boos and got a decent hit as they prepare for their international comeback. Warner looked scratchy at the start but made 43 before falling to Liam Plunkett. Australia, after being put in, lost Aaron Finch early but recovered well via a 64-run stand between Warner and Shaun Marsh.

Marsh failed to convert his start as he fell in the 23rd over with 109 on the board. Australia needed to lay the platform for a big total but the batsmen failed to show any sort of urgency. Usman Khawaja was dismissed for 31 while Marcus Stoinis was able to manage just 13. As Smith kept the runs flowing, he was helped massively by Alex Carey, who made 30 off 14. Smith reached his century with a six and a single before falling in the last over.

England went into the contest with several injury concerns as they fielded just XI for the tie. Things didn't improve for them as Mark Wood, Jofra Archer and Liam Dawson left the field because of injuries. While Wood pulled up while running in, Archer picked up the leg injury after a dive. Dawson went out after hurting his hand as Paul Collingwood, the assistant coach, made several appearances on the field with the home side running out of players.