Salman gets emotional about Laxmikant 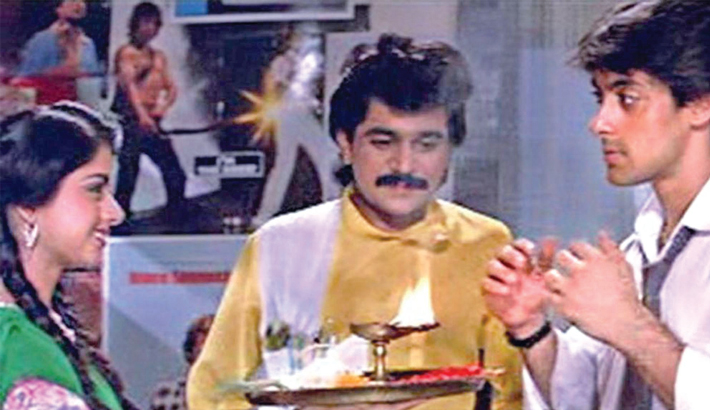 Laxmikant Berde in a still from Salman Khan and Bhagyashree’s Maine Pyar Kiya.

Actor Salman Khan has worked with Laxmikant Berde a number of times. He says the late actor was one of the biggest reasons for the success of their 1989 film Maine Pyar Kiya.

Salman recently shot for an episode of the show Sa Re Ga Ma Pa Li’l Champs where he opened up about his former co-star. Contestant Ritik Gupta performed to ‘Tumse milne ki tamanna hai’ from Salman’s film Saajan, which left the actor emotional, reports Hindustan Times.

Salman shared: “This song has a lot of beautiful memories attached to it. This song is from our movie Saajan, which was a big hit. This was my introduction song in the movie along with my very close friend Laxmikant Berde. I have done a lot of movies with him and I think he was one of the biggest reasons behind the success of Maine Pyar Kiya. This song always reminds me of him. Unfortunately, he is not with us anymore.”

Salman recently congratulated Prime Minister Narendra Modi on his “decisive victory” and went shirtless in a bid to urge Indians to work towards a ‘swachch and fit Bharat’. He took to social media and posted a shirtless photograph, giving fans a dose of nostalgia of his Oh oh jaane jana song from Pyaar Kiya Toh Darna Kya.

“Chilling and watching the news... Swachch Bharat, Fit Bharat,” he captioned the photograph. Clearly, he was following the results of the Lok Sabha elections 2019.

He also took to Twitter to congratulate Modi on his victory for a second term. “Many congratulations Honourable Prime Minister Narendra Modi on your decisive victory. We stand by you in building a stronger India,” Salman wrote on Thursday.

As for Salman’s shirtless post, it was flooded with comments from social media users. Actor Varun Dhawan commented: “Bhai just turned 18”, while Salman’s brother-in-law and actor Aayush Sharma commented: “Bhai is back”.