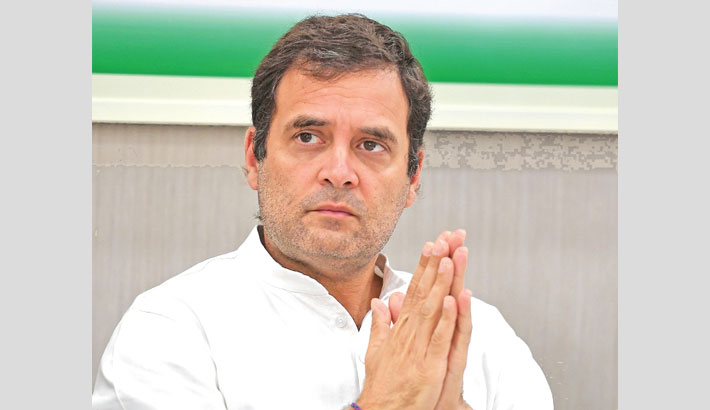 NEW DELHI: Indian Congress president Rahul Gandhi on Saturday offered to step down at the first meeting of the party’s top decision-making body after its devastating performance in the national elections but the offer was rejected “unanimously and with one voice”, reports Hindustan Times.

Instead, the Congress Working Committee, or CWC, gave Rahul Gandhi a free hand to go for a “complete overhaul and a detailed restructuring at every level of the party”. Rahul Gandhi’s offer at the CWC’s marathon meeting came after many leaders had given their quick analysis of the reasons that led to its decimation in the just-concluded Lok Sabha elections. The Congress won just about 52 seats in the Lok Sabha in this round of national elections, a shade better than its worst performance ever, in the 2014 elections, when it ended up with 44 seats.

Seated next to Sonia Gandhi and former Prime Minister Manmohan Singh at the meeting, Rahul Gandhi is learnt to have insisted on stepping down.

But the “CWC unanimously and with one voice rejected the same and requested the Congress President for his leadership and guidance in these challenging times,” said Surjewala. Asked if Rahul Gandhi had agreed to continue, Surjewala pointed to the resolution that underlines the CWC’s rejection of the offer.

The CWC’s decision is final in all matters according to the party’s constitution, a Congress leader later explained.

But there was some acknowledgement that the CWC resolution recorded the resignation offer in some detail because it was not meant to be just a formality. Senior party leader Ghulam Nabi Azad, for one, said he hadn’t seen the kind of unanimity on a leader’s continuation as he saw at today’s meeting for Rahul Gandhi.

Rahul Gandhi, who had fronted the opposition campaign against Prime Minister Narendra Modi, did not speak to the media after the three-hour-long meeting and left with sister Priyanka Gandhi Vadra.

“The CWC unanimously called upon the Congress President, Shri Rahul Gandhi to lead the party in its ideological battle and to champion the cause of India’s youth, the farmers, the SC/ST/OBC’s, the minorities, the poor and the deprived sections,” the resolution said.

For now, the Congress’s top priority is to get the party fighting fit in Maharashtra, Haryana and Jharkhand that will head to assembly elections later this year. Assembly elections in Jammu and Kashmir are likely to be held anytime soon and Delhi will go to the polls in February next year.

The party chiefs in many states are likely to be replaced and new teams put in place within a week or two. This will be in line with a realisation in the Congress that a revival at the national level is possible only when the party resurrects itself in the states. Some new general secretaries and in-charges of states are also expected to be appointed soon.

Gandhi had made it clear at an unusually brief news conference after the poll verdict came on Thursday that the party was determined to fight back.