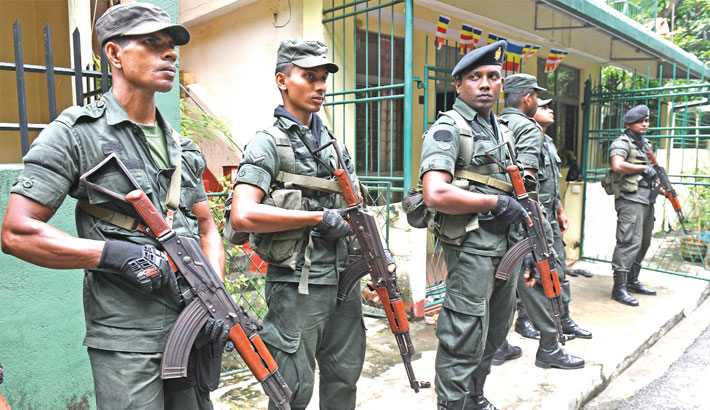 Several Colombo suburbs were targeted by troops using emergency powers on arrests and detentions adopted after the April 21 attacks.

Similar operations were also carried out in North Western Province, near Colombo, where anti-Muslim riots this month left one man dead and hundreds of Muslim-owned shops, homes and mosques destroyed.

Security forces have arrested scores of suspects in connection with the bombings of three hotels and three churches and over what appeared to be organised violence against the island’s Muslim minority.

While authorities say the immediate jihadist threat has been blunted, President Maithripala Sirisena on Wednesday extended for one month the 30-day state of emergency imposed after the suicide bombings.

Sirisena said the move was to maintain “public security”, with the country still on edge after the attacks on three hotels and three churches that were blamed on a local jihadi group, the National Thowheeth Jama’ath (NTJ).

The Islamic State group has also claimed a role in the attacks.

Meanwhile, the independent Human Rights Commission of Sri Lanka accused police of failing to prevent the anti-Muslim riots after the bombings.

“There appeared to be no preventive measures taken although retaliatory violence against the Muslim communities was a distinct possibility after the terror attacks of April 21,” the HRCSL said in a letter to acting police chief Chandana Wickramaratne.

The commission faulted the police for releasing suspects who were later seen taking part in attacks on Muslim targets. It said there was political interference to free some suspects.

“As soon as they (the suspects) were released, the mob attacked all Muslim owned shops in Kuliyapitiya town during the curfew and went on to attack shops all the way to Rambawewa,” the commission said.

It acknowledged that police could not have controlled the mobs on their own, but they had failed to arrange reinforcements from security forces.

“Ensure that no undue political or other external interventions are tolerated, and that strict legal action be taken against those who obstruct police officers from performing their duties,” the commission said.