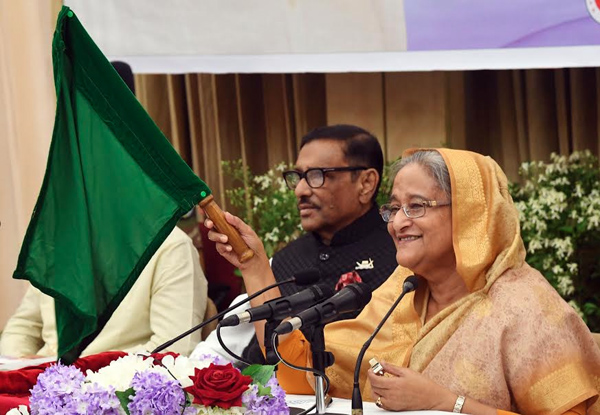 Sheikh Hasian said this while launching a new semi-nonstop intercity train service on Dhaka-Panchagarh route named “Panchagarh Express” through video conferencing from her Ganabhaban residence in the capital.

Highlighting various steps of her government for expanding the rail network across the country, the premier said a rail line is being constructed on the Padma Bridge and it will be extended up to Barishal.

In this context, she mentioned that the government has a plan to further expand the rail network from Barisal to Payra and from Panchagarh to Banglabandha.

At the same time, the government has also taken necessary measures to connect the country with regional and Trans Asian Rail Networks, she added.

The Prime Minister described various steps of her government for the development of railways saying, “Many new stations and new trains were introduced, while signaling system was modernised alongside constructing 346 kilometres new rail lines across the country.”

Sheikh Hasina pointed out that her government constituted a new ministry for the railway after coming to power in 2009 and undertook massive works for the development of the railway.

The premier has asked the authorities concerned to procure more modern passenger coaches and wagons for Bangladesh Railway to meet the growing demands of transportation of passengers and goods.

Apart from this, she stressed the need for achieving capability of building on our own modern wagons and coaches for which she advocated the need for modernisation of the Railway Workshops.

Nowadays, people are more attracted to the railway as its network is being expanded across the country, she said.

The Prime Minister also directed the railway ministry to arrange necessary training for their manpower to increase professional skills.

It will leave from Panchagarh at 1:15pm and reach Kamalapur Railway Station by 10:35pm, and will depart from Dhaka at 12:10am and arrive at Panchagarh at 9:40am.