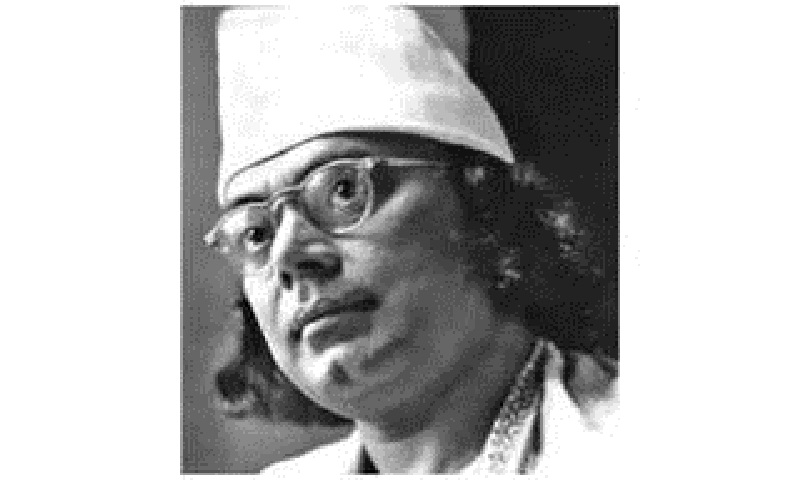 The 120th birth anniversary of national poet Kazi Nazrul Islam is being observed across the country with due respect and festivity today (Saturday).

He was on 25 May, 1899 at Churulia village in Burdwan district of West Bengal in India.

Through his fiery poems, Nazrul had inspired people to fight injustice, superstition and repression of the colonial rule.

Marking the birth anniversary, the government and different socio-cultural and political organisations chalked out elaborate programmes including discussion meeting on works of the poet.

This year's theme of the birth anniversary was "Bangabandhu's Bangladesh in Nazrul's Conscience."

President Abdul Hamid and Prime Minister Sheikh Hasina issued separate messages recalling Nazrul’s contribution to the fight against any kind of misrule and injustice in the society.

Political leaders, teachers, students and socio-cultural activists placed wreaths at the grave of the national poet on the premises of Dhaka University central mosque in the morning.

Dhaka University family-led by its Vice-Chancellor Prof Md Akhtaruzzaman paid a tribute to the national poet by placing wreath at his grave and participated in a commemoration meeting.

Speaking on the occasion, Akhtaruzzaman recalled ingredients of communal harmony and secularism in Nazrul’s poems and songs.

Through his writings, Nazrul inculcated in the people the idea of patriotism, revolution, reforms, communal peace and secularism, said DU VC.

Ruling Awami League and its student organization Chhatra League leaders and activists also observed the day by placing wreath at the grave of the poet.

Cultural Affairs Ministry and different organisations paid tributes to the poet placing wreaths at his grave.

Different educational institutions across the country celebrated the day through seminars and recitation of Nazrul’s poems and performance of his songs.

The celebration at Darirampur Nazrul Mancha, organised by the Ministry of Cultural Affairs and Mymensingh District Administration, will conclude on May 27.

The programmes marking the celebration will include bringing out processions, discussions and live performances.

According to the book “Nazrul Jiboner Trishal Oddhay” by researcher Rashedul Anam, also assistant director of Institute of Nazrul Studies at Jatiya Kabi Kazi Nazrul Islam University, the poet stayed at Kazir Shimla and Darirampur in Trishal for a year in his boyhood and studied at Darirampur High School (now Nazrul Academy).

Kazi Rafizullah, a sub-inspector of police then working in Bardhaman, brought Nazrul to his village home in Kazir Shimla in 1913 and enrolled him in class VI at the school.

Bipin Chandra Chakraborty was the then headmaster of the school. English teacher Mohim Chandra Khasnabish is quoted: “Nazrul remained silent and absent-minded in class.” Nazrul was good at poetry recitation, Mohim Chandra had apparently said.

Nazrul later shifted to Bechutia Bepari’s house in Trihsal Namapara for his easy movement to and from the school. Young Nazrul was often found playing flute under a banyan tree on the way to school.

Nazrul left Trishal for West Bengal, leaving a heartfelt letter for his headmaster. He only informed Bepari’s daughter-in-law Saforjaan Banu of his departure.

With his versatile talent, the poet played a great role in Bangla literature as a novelist, essayist, poet, writer, lyricists and composers. His songs include a significant part of his literary work. He composed nearly three thousand songs. He created a new genre in Bengali music which includes Islamic Ghazal and Hindu Shyama Sangeet.

This rebel poet left his last breath on 29 August 1976. In accordance with his wish, Nazrul was buried beside a mosque on the campus of the University of Dhaka.