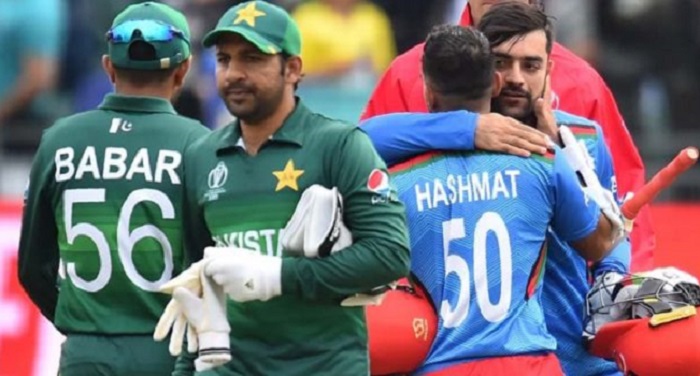 Afghanistan rode on an unbeaten knock of 74 runs by Hashmatullah Shahidi to pull off a three-wicket victory over Pakistan in a last-over thrilling World Cup warm-up match at County Ground, Bristol, on Friday.

In the second warm-up game, South Africa defeated Sri Lanka by 87 runs at Sophia Gardens in Cardiff. The World Cup 2019, to be played in a round-robin format, will be played from May 30 to July 14 in England and Wales. Hosts England will play South Africa in the World Cup 2019 opener at Kennington Oval, London.

After opting to bat, Pakistan managed to post 262 runs before being bowled out in 47.5 overs. Babar Azam top-scored for Pakistan with 112 runs off 108 ball, including 10 boundaries and two sixes.

Apart from Imam-ul-Haq's 32 off 35 balls and Shoaib Malik's 59-ball 44, no other Pakistani batsman managed to impress much with the willow.

Chasing a competitive target, Afghanistan looked confident since the start of the innings. Even though wicket-keeper batsman Mohammad Shahzad was retired hurt on 23 runs, other opener Hazratullah Zazai scored a quickfire 28-ball 49 to put Afghanistan in driver's seat.

However, Zazai was dismissed by Shadab Khan in the 12th over to disrupt Afghanistan's momentum in chase.

Hashmatullah Shahidi capitalised on a brilliant start with the help of Rahmat Shah (32) and Mohammad Nabi (34).

Shahidi smashed 74 runs off 102 ball, including seven boundaries and a winning run that he scored off the fourth ball of the final over by Wahab Riaz (3/46).