Booters off to Thailand for AFC camp 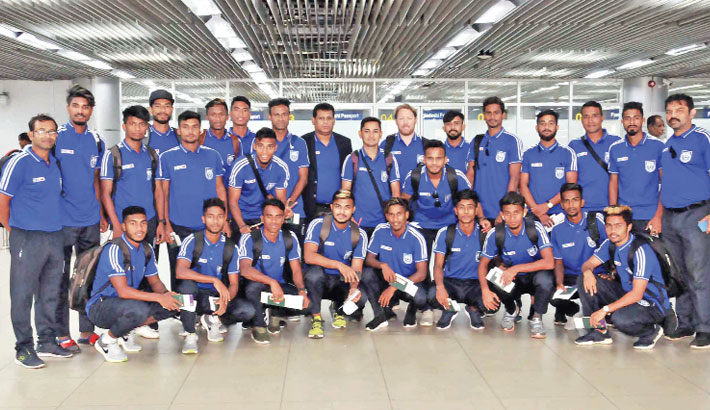 Players of Bangladesh National Football Team pose for a photograph at Hazrat Shahjalal International Airport in the capital before departing for Thailand on Friday. — BFF Photo

A 31-member Bangladesh National Football team left Dhaka to join a 10-day preparation camp in Thailand ahead of their joint qualifications for FIFA World Cup 2022 and AFC Asian Cup 2023 against Laos on Friday.

Head Coach of Bangladesh team Jamie Day, who arrived here on Thursday, said he is not feeling any pressure ahead of their matches against Laos. “I’m not worry. I don’t feel any pressure. I’m excited about the next two weeks,” he said ahead of pre-tour press conference at the BFF House here on Thursday.

Jamie went back to England in early April for completing a pro-licence course of coaches.

After arriving here, the English man signed a one-year extension of his contract until May 2020 with the Bangladesh Football Federation (BFF) on Thursday.

The BFF picked the 31-member squad, including 23 players and 8 coaching staff. Bangladesh team will return home from Laos on June 7.

Bangladesh team comprised of senior and under-23 booters will play the both away and home matches against Laos. Veteran defender Topu Barman and midfielder Atiqur Rahman Fahad were ruled out of the team due to injury.

Bangladesh Captain Jamal Bhuiyan said they are focusing on the game and want to win against Laos. “It’s totally a new squad. We’ve missed Topu and Fahad. But, we’re focusing on our game and everybody wants to win the game,” he added.

BFF Senior Vice-president Tabith Awal also expected that the team will perform well in Laos. “Our players are more mature. I believe that our team will qualify for the next round of the meet beating Laos,” he said.

The six winners of the 12-team fray will join top 34 Asian teams in the round-2 qualifiers, scheduled to be held in September.

Bangladesh are ranked 188th and 41st in the FIFA International Ranking and AFC Ranking respectively while Laos remained 184th and 38th.

In their last meet in the group stage of Bangabandhu Gold Cup, Bangladesh beat Laos by 1-0 goal in Sylhet in October last year.

In the previous two meetings, Bangladesh lost to Laos by 1-2 goals in the first round of the Asian Cup in Hong Kong in March 2003 and played a 2-2 draw in a FIFA international friendly in Vientiane last year