Who will win the World Cup? The captains have their say 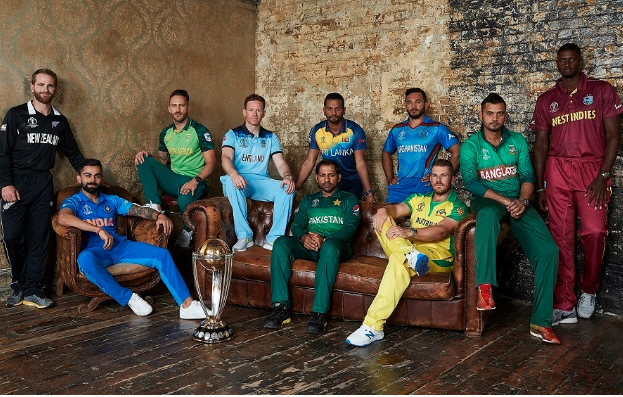 It's a good question, I think, England have been in great form over the last couple of years and along with India, they've probably been the standout performers. So you'd have to say England are definitely the favourites.

I think it's important that some of our guys have got that World Cup experience and having, I think, six players who have been a part of a winning World Cup will hold us in good stead going forward, hopefully. But it's a different tournament and, once you get out and start playing, the pressure takes over. So it'll be a great tournament.

I've no idea. I don't think there's anybody that's head and shoulders above everybody else. In a 10-team World Cup, the ten best teams in the world, it's going to be an extraordinarily competitive tournament. And I think there will be some quality cricket played. We're really looking forward to playing.

Of course being at home will be a factor. It's called home advantage for a reason. We get to spend a lot of time in our own beds, we'll see a lot of our families, and get to prepare like we have done for a number of years now. But England's a great place to come and play cricket, if you ask any of these guys or any of their players, they love coming here and playing.

We've had both our warm-up games televised already so there's much pressure on the team wherever we play.

The way I look at it, there's always going to be a huge fan-base for us anywhere we play in the world. But I have to agree with Aaron, I think England is probably - in their conditions - the most strong side in this tournament, but I also agree with Morgs, that all ten teams are so well balanced and so strong, and the fact that this is a tournament where we have to play everyone once, makes it all the more challenging. I think that's going to be the best thing about this tournament, I see this as probably one of the most competitive World Cups that people are going to see

As Morgan and Kohli said, all the teams are really balanced, and all are good teams, so I wish them all the very best and I think people will watch great cricket here.

Definitely if you've seen the past results of Pakistan teams in England - I'm talking about the 1992 Test series, or the 1999 World Cup or 2017 [Champions Trophy] - Pakistan has been very good in England. So we are very confident, in'shallah, we will do very well.

We have played good cricket and have good experience [of playing] in England as well, so we will try to do well, and do our best. We came early to get some confidence in the conditions, we are in good shape and will do our best.

There are a few guys who were in the last World Cup, which is great, so there is some experience there. But naturally, with four years in between tournaments, there are a lot of new players as well. I guess there's been a lot of talk around rankings, favourites, underdogs, but I think the thing that stands out is how balanced all the teams are and, when it comes to the day, anything can happen, which makes the way for a really exciting competition.

If you look at international cricket right around the circuit, you'll see very close competitive series home and away. It's not just more home teams that are dominating. So, like the other captains are saying, I think all of us are really excited to try this new tournament, with everyone playing everyone once. I think it's a great tournament.

We have a great team mix, probably as good as we have ever had. We have some young players coming through and we are very excited about them.

To play every side is great for us. We worked hard with the qualifiers to get here, that means it is the top 10 in the world, we want to play them all and give ourselves a shot. The team that wins will definitely deserve it.

We have peace in Afghanistan now and cricket is a huge part of that. We are very happy and hopefully that can help us produce good performances. We're excited to be here in front of the crowds. It's the top ten teams in the world and we are proud to be representing Afghanistan.