8,000 people die in a year in Bangladesh 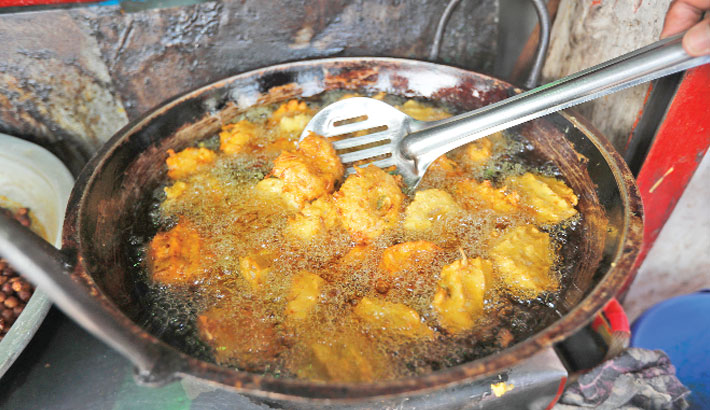 Cooking oil is being reused to prepare an Iftar item at a roadside shop in the capital’s Dainik Bangla intersection on Thursday.

A new report released by the World Health Organization (WHO) confirms that 8,000 people die each year in Bangladesh due to unnecessary overexposure to the toxic chemical, trans fat.

Describing the Bangladesh situation, the WHO report said, “In 2010, approximately 8,000 deaths were attributable to high TFA [trans fatty acid] intake, and mean TFA intake was 2.4 percent of total energy intake.”

Bangladesh does not follow international best practice when it comes to regulating the amount of harmful and unnecessary trans fat in our food, WHO concluded in its first-ever global annual report on trans fat elimination, released on Thursday at the World Health Assembly in Geneva, Switzerland.

Bangladesh is looking at the Indian model of a progressive reduction in permissible trans fat, as opposed to a complete ban, WHO said in its report. India is considering lowering its 5 percent trans fat limit to 2 percent by 2022, but this limit only applies to fats and oils – not foods.

“Thousands of lives are threatened by the continued and unnecessary presence of trans fat in our food. I urge BSTI and BFSA to cap trans fat in all foods at 2 percent of total fat content. Anything less would put people in mortal danger,“ said National Professor Brig (retd) Abdul Malik, founder and president of National Heart Foundation of Bangladesh.

Industrially produced trans fat can easily be replaced with healthier alternatives, and six countries restricted use of the toxic chemical in 2018, while another 25 (including the European Union) adopted policies that will come into effect over the next two years.

The WHO also released a set of modules to help countries implement REPLACE, the action package launched a year ago to eliminate industrially produced trans-fat from the food supply by 2023.

“Excessive trans fat is harmful for the human body. If the edible oil is burnt in higher temperature and the oil is used to make foods, then the foods contain excessive harmful trans fat,” Dr Khaleda Islam, professor of Institute of Nutrition and Food Sciences at Dhaka University, told the daily sun.

“If trans-fat is removed from our foods, then many heart disease cases will be prevented. Trans fat directly is related to heart diseases,” Professor Sohel Reza Choudhury, head of Department of Epidemiology and Research of National Heart Foundation Hospital & Research Institute (NHFHRI), told the daily sun.

According to health scientists, trans fat, or trans fatty acids, are unsaturated fatty acids that come from either natural or industrial sources. Naturally occurring trans fat comes from products, derived from ruminant animals, like milk, butter, ghee, beef, mutton and are less harmful if consumed in moderation.

Industrially produced trans fats is formed during hydrogenation of vegetable oil like production of butter substitutes such as margarine and semi-solid fats with longer shelf-life, for example, daldha (vanaspati) used for producing commercially processed foods including bakery items, they said.

According to a situational analysis report of the NHFHRI, reuse of edible oil in making food increases trans fat in the foods while processing of foods containing unsaturated fats in deep frying creates huge trans fat in foods like singara, samusa, cutlets and fried chicken.

“The risk of dying from heart disease is estimated to be 23 percent higher when two percent of the daily energy intake is in the form of trans fat. Globally, more than 500,000 deaths in 2010 were attributed to increased intake of trans fat,” it said.

According to the health experts, elimination of trans fat from the food supply is one of the priority targets of the WHO in 2019-2023 as WHO recommends that total trans fat intake be limited to less than one percent of total energy intake (less than 2.2 gram per day in a 2,000-calorie diet).

Talking to the daily sun, Sohel Reza Choudhury of NHFHRI further said their institute has been working to make people aware of trans fat in foods while Bangladesh Food Safety Authority and Bangladesh Standards and Testing Institution (BSTI) are also working to reduce trans fat through promulgating necessary regulations.

According to the findings of the NHFHRI, most of the demand for edible oil in Bangladesh is met through import of palm and soya oil, Vitamin A fortification of edible oil in mandatory but quality of unbranded oil, having largest market share, is poorly regulated.

It also stated that consumption of trans fat by specific population groups like school children, working men and slum dwellers is increasing while cooking oil is repeatedly used for deep frying to prepare various street foods like chanachur, singara, samosa and jilapi in restaurants and food processing factories may be a source of trans fat.

The report study also stated that consuming only 100g of deep-fried snacks or backed foods like biscuits, pastries and cake containing 20 percent of the fats as trans fat would far exceed the WHO recommendation of one percent energy from trans fat.

Partially hydrogenated oil is widely used to prepare baked foods while ten brands of biscuits analysed from Dhaka contained 5-31 percent trans fat but the WHO recommended only two percent of trans fat out of total fat in foods, it added.

The NHFHRI observed that there is currently no national law, regulation, or court order regulating the permissible quantity of trans fat in foods or ingredients (like PHO) in Bangladesh and there is a national measure related to trans fat, but it only recommends voluntary trans fat labelling.

Mentioning recommendations for controlling trans fat in Bangladesh, the study proposed use of good policy and regulatory environment while the technical committee of the Safe Food Authority may recommend such regulations to protect consumer health.

It also suggested consumer education to avoid intake of such foods in line with the National Plan of Action for Nutrition Two (NPAN2) recommendation. “Trans Fatty Acid regulation should be part of the overall program of NCD control: It should be part of an overall programme of regulation of added salt, sugar, and promotion of the healthy lifestyle.”

The WHO has welcomed the commitment by the International Food and Beverage Alliance (IFBA) to align with the WHO target to eliminate industrially produced trans fat from the global food supply by 2023, said a report published in website of the WHO in May this year.

“Eliminating industrially-produced trans fat is one of the simplest and most effective ways to save lives and create a healthier food supply,” said Dr Tedros.

In line with the REPLACE initiative, WHO has called on all food producers and oil and fat manufacturers, not only IFBA members, to commit to elimination of industrial trans fat from the global food supply.

According to the WHO, trans-fat intake is responsible for over 500,000 deaths from coronary heart disease each year globally.

As its ‘REPLACE’ package as a roadmap for reduction and elimination of trans fat, it proposes reviewing dietary sources of industrially produced trans fats and the landscape for required policy change, promoting the replacement of industrially-produced trans fats with healthier fats and oils, legislating or enacting regulatory actions to eliminate industrially produced trans fat, assessing and monitor trans fat content in the food supply and changes in trans fat consumption in the population, creating awareness of the negative health impact of TFA among policy-makers, producers, suppliers, and the public and enforcing compliance with policies and regulations.