We can beat anyone, declares Mashrafe 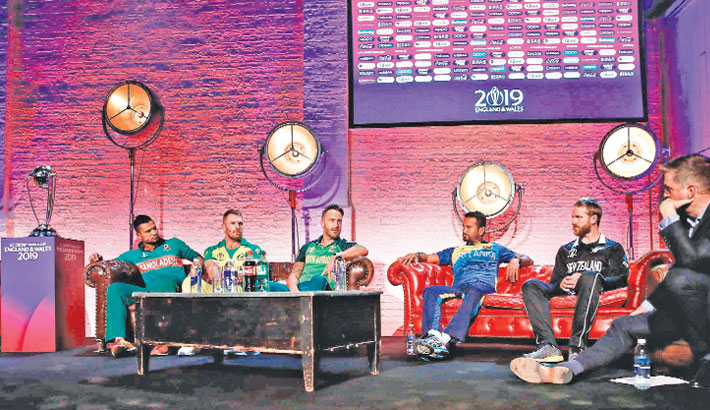 Bangladesh skipper Mashrafe Mortaza, left, is seen along with the other national cricket team captains during their official press conference ahead of ICC Cricket World Cup 2019 in London on Thursday. — AFP PHOTO

Bangladesh skipper Mashrafe Mortaza announced that Tigers will give it their all in the upcoming ICC World Cup 2019 and with a combined effort they can also beat anyone. During a pre-tournament press conference in London on Thursday, Mashrafe also eluded to the unpredictable nature of the game in modern times.

“Cricket is such a game where in your day one can beat anybody. We are pretty confident about our strength and I think we can beat anybody, Nonetheless evreything depends on how good of a start we get,” said Mashrafe.

He also felt that Tigers are going into this World Cup with the best possible squad and the mix of experienced and young cricketers will pan out in the coming mega-event.

“We have a got great bunch of boys and good setup of support staff. Both senior and junior cricketers are playing well. They are playing really exiting cricket,” told Mashrafe.

Bangladesh clinched their maiden major trophy in some style as they secured a 5-wicket victory over West Indies in emphatic fashion the tri-series final at Malahide Cricket Club Ground in Dublin last week.

Winning a major trophy remained elusive for Bangladesh for quite sometimes as they failed to clinch any trophy despite being contesting final in six occasions.

After their recent success in Ireland the expectation of their fans to do something similar in the global tournament looked to be the buzz in the cricket world considering their experience and strength.

“In Ireland we played quite well. As we approach our first match of June 2 against South Africa. Hope fully we will start well,”

Mashrafe said that playing against South Africa, New Zealand and England in the opening three games seems to be extremely challenging for them.

While Tigers removed chokers tag in style it also helped them complete their last preparation for the World Cup with huge amount of confidence under their belt. The way Bangladesh batsman played throughout the Tri-nation tournament indicated that they won’t shy away from trying to score heavily when they reach England for the upcoming ICC World Cup despite it was raised as the major concerning area for them considering they are not used to score at a pace unlike some of the other cricketing nation.

Bangladesh is expected to open their account against South Africa on June 2 while they will take on New Zealand and hosts England respectively on June 5 and 8.