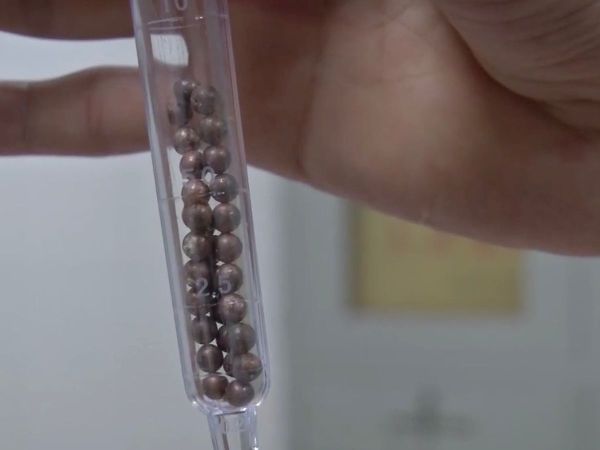 A 13-year-old boy in north-west China had to undergo surgery after inserting 29 magnetic beads into his penis.

The teen in Xi'an, Shaanxi province only saw a doctor after three months of pain as he was 'too embarrassed' to tell his parents, according to Chinese reports.

The young patient told doctors that he had inserted the string of metallic balls into his urethra 'out of curiosity'.

Dr Zhou Yanyan at the Xi'an Children's Hospital told reporters that the boy wasn't able to remove the balls after inserting them into his body.

'He was too embarrassed to tell his parents and thought he could pass them out naturally,' Dr Zhou told Shaanxi News.

'The child said he was suffering from constant pain and difficulty while urinating over the past three months,' he added.

The child finally sought medical attention on May 11 after his parents noticed him walking with a limb and questioned him about it.

An X-ray image shows the Buckyballs, which were each about five millimetres (0.2 inches) in diameter, all bundled up in a cluster in the boy's bladder.

Doctors decided to operate on the boy's bladder and removed the entire cluster of balls, which was about three centimetres (1.1 inches) in diameter.

The young patient has been discharged from hospital after the operation and is recovering well, the report added.

Dr Zhou advised parents to offer proper guidance and education to their children as they undergo puberty.

There had been a spike in similar cases in China where young teenagers would need surgery to remove clusters of magnetic beads from their bodies. The balls are a common feature in a range of popular toys.

In January, a 12-year-old boy in Wuhan, Hubei province underwent surgery to remove 39 magnetic beads after inserting them into his penis.

The child, nicknamed Xiaorui, later admitted that he had inserted the beads into his penis out of curiosity.

In May last year, a 14-year-old toddler in Qinhuangdao, Hebei province had to undergo surgery to remove 21 magnetic beads after swallowing them from a toy.

The balls had formed a ring in his stomach, causing a fever and severe vomiting.