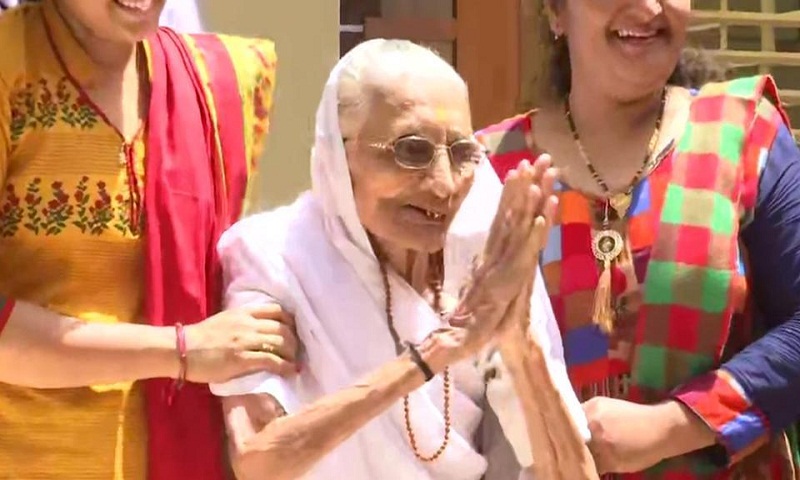 Prime Minister Narendra Modi’s nearly 99-year-old mother Heeraben Modi on Thursday greeted the BJP’s supporters outside her home in Gandhinagar of Gujarat as the party looked set to sweep the Lok Sabha election.

Prime Minister Modi was leading in Varanasi by a margin of 169,000 votes, according to Election Commission trends as the BJP and its ally Apna Dal surged ahead of their rivals in 58 of the 80 Lok Sabha seats in Uttar Pradesh.

With a lead in all the parliamentary constituencies after more than two hours of counting, the Bharatiya Janata Party is also looking to retain its stronghold in the home state of Modi and party president Amit Shah in the two-cornered contest with the Congress. It had won all the 26 seats in the western state in the last Lok Sabha election.

The Congress, which had given its best performance since 1995 by winning 77 seats in the assembly elections, was trailing by huge margins in most of the Lok Sabha constituencies.

He had met his mother on Modi on April 23 before casting his vote in Ahmedabad as polling began in the third phase of Lok Sabha election.

All the 26 parliamentary constituencies in Gujarat polled in the third phase of the general elections, reports HT.