Protests across US against abortion bans 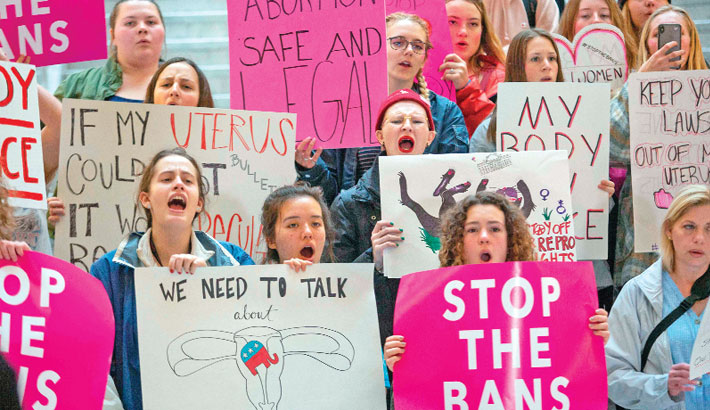 Pro-choice activists hold signs at a rally to oppose abortion bans happening throughout the United States, at the State Capitol Building in Salt Lake City, Utah on Tuesday. – AFP PHOTO

WASHINGTON: Abortion rights activists protested across the country on Tuesday against Republican-led efforts to restrict access to the procedure—a drive they fear will end with a challenge to the 1973 US Supreme Court ruling legalizing the practice, reports AFP.

The rallies come nearly a week after the southern state of Alabama passed the country’s toughest ban, prohibiting abortion in all cases—even rape and incest—unless the mother’s life is at risk.

Alabama is among more than a dozen states which have adopted laws banning or drastically curtailing access to abortion.

Even some of the lawmakers in those states have admitted that their end goal is to put the issue—one of the most divisive in the United States—back before the nation’s high court.

“I feel there is a real war on women in this country,” said 63-year-old Danna Ives-Kimpel, who was one of hundreds of protesters who gathered outside the Supreme Court in Washington. They urged the nine justices inside to protect the landmark decision in Roe v. Wade, which enshrined the right to abortion up to the point that the fetus is viable outside the womb, about 24 weeks.

“It would be absolutely devastating” if the ruling were overturned, said Michaela Masson, a 25-year-old working in government affairs in the US capital.

Highlighting the key role the issue could play in the 2020 presidential elections, several Democrats vying to take on President Donald Trump including Pete Buttigieg and Amy Klobuchar appeared at the rally.

Protests also were held in New York, Los Angeles, and Atlanta, Georgia. Others were planned in the South, the conservative “Bible Belt” that includes Alabama.

“Today’s the day we take to the streets to defend reproductive freedom. Our dissent is powerful. Our voices are powerful,” the group said on Twitter.

Zak Butterfield, a 45-year-old father attending the rally in Washington, said: “I am not going to stay quiet.”

For years, the doorsteps of abortion clinics nationwide have been the scene of near-daily standoffs between pro- and anti-abortion rights activists.

That battle is now front and center in Alabama, which has three clinics.

The Alabama law is to take effect in November. It seeks jail terms of between 10 and 99 years for doctors performing abortions, which are counted as homicides. It does not, however, penalize the mother.

Earlier this month, the governor of Georgia signed into law a ban on abortion from the moment a fetal heartbeat is detected. Georgia became the sixth US state to outlaw abortion after roughly six weeks of gestation.

Missouri’s legislature on Friday made the procedure illegal from eight weeks of pregnancy, and did not make exceptions for rape or incest either.

Ohio, Mississippi, Kentucky, Iowa and North Dakota have enacted restrictive laws, while Florida and Texas are considering doing the same.

All of the state bans have either been blocked by a judge or are headed for the courts.

But there is no guarantee that any of the laws recently passed, including the one in Alabama, will be taken up by the high court.

Each law would first have to make its way through the lower courts and then be chosen by the justices as a case to be heard.

The hopes of anti-abortion activists have been lifted since President Donald Trump took office more than two years ago.

The Republican leader had promised to appoint only judges opposed to abortion, and has already named two conservatives to the highest bench, tipping the balance to a conservative-leaning majority.

“After Trump got elected, we knew they would chip away at our reproductive freedom,” said Washington protester Robin Pereira.

Although Trump himself has given impetus to the anti-abortion side with his Supreme Court appointments and declarations that he is “strongly Pro-Life,” he said late Saturday that exceptions should be made for “rape, incest and protecting the life of the mother.”