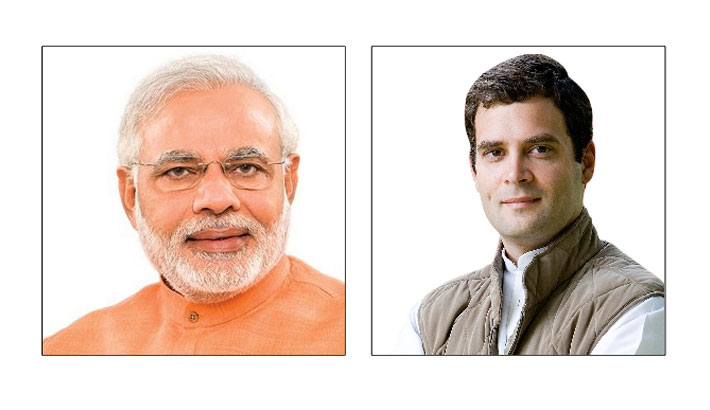 It is D-Day for India today. The people’s mandate in history’s most hard fought elections ever which saw a bruising campaign, hurling of abuses by stalwarts, a surprising exit poll and a controversy over vote tampering which continued even as the Election Commission prepared to announce the winner.

The Election Commission is set to announce the mandate the people of India gave to either Modi or Gandhi, although the post-election scenario saw both sides making behind the scnene parleys to ensure the politically sought after post of prime minister and the whole process being over shadowed by the controversy over tempering in the Electronic Voting Machines (EVM). The election commission has firmly rejected opposition claims of any malpractice, but in some states the opposition activists were reported to be guarding strong rooms storing the EVMs.

The exit polls after the voting ended on 19 May gave a an unprecedented landslide to Prime Minister Narendra Modi with more than 300 seats out of 545 up for grabs.

Political analysts and TV channel talk shows indicated that Modi was very likely to return to office for another five-year term with an historically largest majority ever.

Big names in Indian politics like former Indian President Pranab Mukherjee, Sharad Power and N. Chandrababu Naidu, Chief Minister of Andhra Pradesh,have made their contribution to the post-poll controversy, debates and a hunt for allies.

Pranab Mukerjee asked the Election Commission to “protect the mandate” people have given. Sarad Power was talking to opposition party leaders after frantic efforts were being made to stop Modi from returning to power.

“The opposition is by all likely trying to replicate the Karnataka way of forming a government where earlier BJP won, but failed to form a government against an united opposition. Thus a lot of behind the scene talks are underway, even today (Wednesday),” Pallab Bhattacharya, a veteran journalist who has covered elections for decades, told the Daily Sun.

However, he added that if the outcome is close to what the exit polls indicated, which he thought was far-fetched by normal standards, Modi would then sail to the number 7, Lok Kalyan Marg, prime minister’s principal work place and official residence.

Despite the EC rubbishing opposition claims, newspapers and TV channels continued to show footages of allegedly cases of EVMs found kept unprotected and that rules were not followed in shifting the EVMs within the stipulated time.

Congress and other opposition activists guarded the EVM strong rooms and Rahul Gandhi told his supporters in a Tweet that not be “remain alert, be fearless ... you are fighting for the truth. Don’t fear exit polls.”

Prime Minister Modi was quoted as saying that it was a needless debate as his supporters were said to be ready with sweets and garlands.

“When the votes are counted tomorrow (Thursday), India will not just be electing a new government but also scripting the political fates of several dozen parties. We will know tomorrow who will run the government for the next five years (hopefully). Apart from that, however, there is a question about the long term political future of parties, the extent to which they are able to institutionalise stability and continuity,” The Times of India said in its editorial on Wednesday.

It added:“To many of them are in the grip of dynasties and/or personality cults, which may render them unable to respond to fresh challenges.”

Most political observers told the Daily Sun that it was an election of Modi versus Rahul, not their political alliances where, as per trends, the prime minister outshone his arch-rival.

For the future, they said BJP has to find a new leader from its mid-level to take charge with Modi’s style of leadership, while Rahul needed to be more sharp in political dealings and Congress must give up the dynastic leadership although it might not be easy.